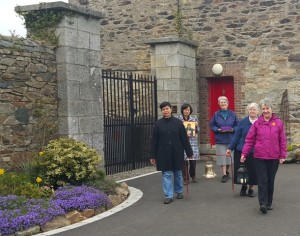 A bell cast in Italy to mark the 1400th anniversary of the death of St Columbanus in 615 has been making its way around Ireland and is due to arrive in Bangor, Co Down later this month.

It arrived in Ireland via Cork from Savona in Italy on a ship called the ‘Great Europe’ on 14 March 2015.

The bell is following the Turas Columbanus – The Columban Way – i.e. the Irish stage of the cultural route to Bobbio where St Columbanus died for this special anniversary year.

The Turas Columbanus is a new pilgrim trail that follows in the footsteps of St Columbanus from his Leinster birthplace to Bangor via Cleenish Island in Fermanagh. It makes its way through both historic and monastic scenery for 433kms.

It is broken up into four clusters and is designed for walkers, cyclists and motorists.

Like many European pilgrim walks such as the Camino de Santiago, it is not designed to be completed in one journey but to be taken in stages over several trips.

It is hoped that the route will be extended throughout Europe with its final destination Bobbio in northern Italy as the culmination of a faith journey in the footsteps of St Columbanus. 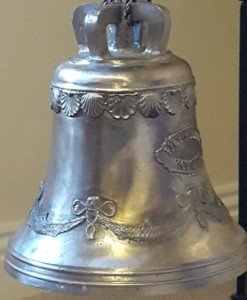 On 24 March, the Columbanus bell arrived in Magheramore, a house of the Sisters of St Columban, the bell was in the parish of Myshall Co Carlow, in the shadow of Mount Leinster, where it is believed that St Columban was born.

The Bell has been brought to Bray parish by the Knights of St Columbanus who are organising its pilgrim journey around Ireland.

From Bray, the journey will continue to Maynooth, Dalgan Park, Cleenish in Co Fermanagh, where St Columban studied; to Armagh and then on to Bangor from where he set sail on his missionary journey.

In Bangor, it will no doubt play a prominent part in the centenary celebrations of the Knights of Columbanus before eventually arriving in Bobbio where St Columban died and is buried.

The bell will visit the following locations this month:

For more information and if you want to volunteer to help transport or walk part of the route please contact: Paddy Byrne 0044(0)771 8741 773 or email: [email protected] 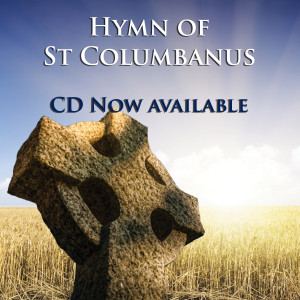 Separately, a special hymn composed by Ronan Johnston to celebrate the Knights of St Columbanus’ centenary in 2015 is now available to purchase.

Every line of the Hymn of St Columbanus is taken directly from the Scriptures and the composer, Ronan Johnston said he tried to evoke the personal spirituality of St Columbanus, his personal devotion to Christ and his great courage in the hymn.

It speaks also of the difficulty for men spiritually today and the great fear of standing against the “spirit of the age”, the culture of death and being shunned for taking a stand.

The words “we” and “I” are used in chorus and verse to represent the collective and personal elements of Church. The middle 8 takes up the motto of the Knights of St Columbanus – Instaurare omnia in Christo – to restore all things in Christ.