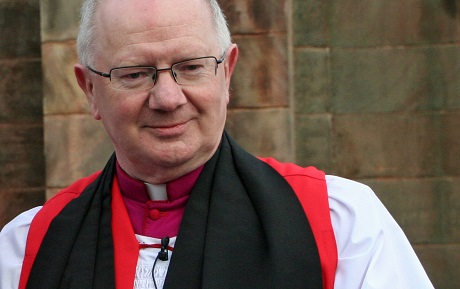 The Church of Ireland Primate has hit out at the lack of state funding for the hospice movement.

In his presidential address on Thursday, on the opening day of the General Synod, Archbishop Richard Clarke of Armagh said, “All life is a gift of God; it is never a commodity.”

He urged Christians across the island of Ireland to “never concede that life is other than sacred, a gift of God from beginning to end, never to be thrown away as though it were personal property.”

He criticised lack of support for the hospice movement which he said was not given proper support from state funding.

“A hospice I visited recently on the edge of Armagh diocese has to raise two-thirds of its financial requirements through its own fund-raising operations,” he noted.

He added, “We simply have to ask, as Christians living in modern society, where public priorities are?”

Dr Clarke warned that those made in God’s image and likeness can never be a commodity for the use of others, to be neglected if they are not of obvious personal interest to us.

He said it was one of the aspects of modern culture he most feared – the turning of all human life into a commodity.

In a strongly pro-life message, Archbishop Clarke said, “The very beginnings of life and the end of life on earth are a gift never to be treated as anything less.”

Referring to Belgium’s recent legislation permitting euthanasia for children, provided that there has been discussion with parents, the Anglican Primate described the move as “not merely a slippery slope; it is surely near the bottom of such a slope.”

The British House of Lords is due to consider legislation on assisted suicide within the next few months.

Elsewhere in his presidential address, the Archbishop of Armagh lent his support for a motion appealing to the synod to get behind the ‘FAB’ campaign which supports those who donate blood and organ transplant after death in order to give the gift of life to others.

The Church of Ireland Archbishop said he would like to see more Christians support the ‘Flesh and Blood’ (FAB) campaign, which has been running in Britain for the past year.

Archbishop Clarke said on Thursday that he wished to see the campaign become part of the Irish church scene in the coming months in partnership with other Christian traditions.

He said the campaign sees the human body, through organ transplant and the donation of blood, as a potential gift of life to others even after death.

“Although almost everyone would accept an organ if they needed one, not everyone is prepared to make that offer for others,” the Archbishop said.

Dr Clarke said there were currently 150 people in Northern Ireland alone on a transplant waiting list and that each year around fifteen people die needlessly as they wait for a suitable organ.

However, less than one-third of the population has indicated that they would be willing to be organ donors.

Across Ireland, more people who are willing to give blood or organs after death are needed, he said.

The motion was endorsed by the synod.

Acknowledging that there can be no simple solutions for the political class to find money for everything in jurisdictions that are “simply economically insolvent”, he said nevertheless, it is the poorer who are becoming poorer and in some cases “genuinely destitute” right before our eyes.

Of the role of food banks in alleviating such destitution, the Primate suggested that Irish society should feel “some sense of shame that this system is now accepted as a necessary backup to state support in any modern society.”

“The generosity of so many people in supporting food banks is of course wonderful – a fine example of giving – and must be encouraged, but should this particular form of individual giving actually be necessary? Surely not in a functional humane society that looked after its weakest as a matter of course,” he said.

A separate appeal was made for more people to foster children in need. “There is now a massive need for foster homes for children. In both jurisdictions, the number of cases of abuse or neglect of children has increased dramatically in the past few years,” the Archbishop said in his presidential address.

He admitted that in one sense this was an encouraging sign that people are no longer turning a blind eye to the abuse of children.

“But it means that the number of children now seen as needing care, whether because of neglect or direct abuse, is increasing.”

Fostering children can never be easy, he said, as it required so much emotional strength in those who take on this responsibility.

“It is a need in our society, and it is one that those who value life as a gift, who have the necessary strength and equilibrium, and who seek to give love, stability and care to the most vulnerable of all in our society, can meet.”

On the political front, the leader of the Church of Ireland urged those who have been entrusted with political leadership to tell us what they wish to offer, to give, to the future, to our children and grandchildren.

“It surely cannot simply be ‘more of the same’” he queried.

“There is continuing political paralysis in Northern Ireland; a culture of entitlement for those who in the Republic already have plenty; and an austerity which assaults the poor more than the wealthy in both our jurisdictions. This cannot be a political vision that truly seeks to give to the future,” Archbishop Clarke commented.