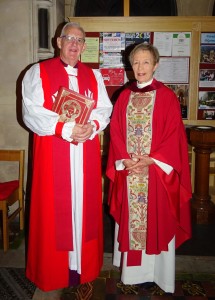 Twenty-five years of women’s ministry in the Church of Ireland was celebrated at a service in Christ Church Cathedral on Sunday.

The service marked the anniversary of the ordination to the priesthood of Canon Ginnie Kennerley on 21 October 1990 by Archbishop Donald Caird, assisted by Archbishop Henry McAdoo and Bishop John Neill, then Bishop of Tuam and later Archbishop of Dublin.

In his homily at the weekend, Bishop Neill, who had been an advocate for the ordination of women, recalled the Lambeth Conference of 1988 when he was involved in seeking the admission of women to the priesthood.

He said one of the most moving speeches he heard was from the first woman priest he had ever met, Nan Peete from the Episcopal Church of the United States of America.

“Her theme was quite simply ‘The time has come…’ The more I reflected on that phrase that she used again and again, the more I realised that there is a right time for change,” Bishop Neill said.

“Patterns in the world change, wrongs are exposed, new challenges are thrown up, and then we look into Scripture and tradition using our God-given reason and we realise that it all makes sense. It is not looking for proof texts, but striving to see the bigger picture of what God is saying to us today,” he said.

Bishop Neill added that the emergence of the voice for admission of women to the priesthood was because “the time had come”.

“The spirit of the age also bears many of the signs of a response to the God of Love, even if totally unconscious of the fact,” he stated.

He also underlined that it was “not for the sake of numbers that Anglicans and other Christians moved towards women in the priesthood, but it is noted that the serious decline in vocations to the ministry is now in those Churches that do not ordain women”.

Referring to the fact that the Christian priest has often been portrayed as an icon of Christ – a person through whom others should be able to see Christ, Bishop Neill said unfortunately this has sometimes been used to assert that the priest must be male, and yet the incarnation is about human nature rather than male gender.

Equally the figure of Mary can be seen as an icon of priesthood balancing this – as one enabling others to see Jesus, as he is brought forth into the world, he suggested.

Speaking on the Feast of St Luke, Bishop Neill said that in line with the emphasis on healing in St Luke’s Gospel, the ministry of women in the priesthood in the Church of Ireland has been “a healing experience – a making whole of the ordained ministry – allowing it to reach out to a fullness of expression which would be sorely lacking if it were not there”.

Bishop Neill gave thanks for the ministry of Canon Ginnie Kennerley and the fact that men and women now serve happily alongside each other in the Church of Ireland and many hold significant positions of leadership.

“There will always be differing responses to a developing tradition that is at the heart of the Church of Christ, but it is vital that we take time and stay together as we seek God’s way forward. The very same issues arose more recently in matters surrounding remarriage following divorce, and today painfully in issues of human sexuality,” he said.

He concluded by saying, “In the midst of all the confusions facing the churches in the world today, let it be our prayer that we may hold on to that vision – praying the Lord of the Harvest to send forth many to bring healing and reconciliation to a broken church and a broken world”.