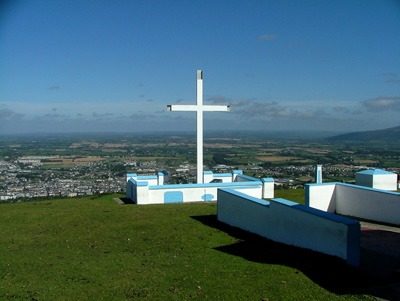 A Clonmel landmark and pilgrimage site was struck by vandalism on Tuesday afternoon, but that has only made locals even more determined to have the site looking its best for this Monday’s annual walking pilgrimage to the vantage point.

The cross has stood on this spot since the Holy Year of 1950 and last year the monument was given a €1500 revamp that included its old aluminium exterior being replaced with steel coated in luminous paint. As a result, last winter the cross shone brighter than ever when illuminated.

Located “across the border” in Co. Waterford, the cross is on top of Cnoc a’ Chomortais in the Comeragh mountains. Many walkers come here throughout the year because the vantage point is excellent, offering views over Clonmel below, across the Suir valley and over to Slievenamon and beyond.

Others make the journey to complete the Stations of the Cross, which were installed here in 1953 after being donated by local families.

Parishioners were dismayed and disgusted this week when they learned that someone had spray-painted swastika symbols on the cross and on the nearby oratory that has stood here since 1963.

Mattie McGrath, Independent TD for Tipperary, said the act had left many people extremely upset, not least those who maintain the cross.

Describing those who attacked the cross as “sad and pathetic individuals who had nothing better to do with their time”, the TD rejoiced in stating that Monday’s pilgrimage is going ahead.

“The cross, and the annual trip up the beautiful Comeragh mountain range to hear Mass is held very deep in the affections of so many people,” he told his followers on social media. “Most of us have beautiful memories of making the trek up and then to be rewarded with a fantastic overview of Clonmel town and the surrounding countryside.”

This is not the first time the site has been attacked in the days running up to the annual pilgrimage; in 2011 the altar had burnt oil poured over it and damage was done to some of the statues.