Climate change could cause 250,000 deaths 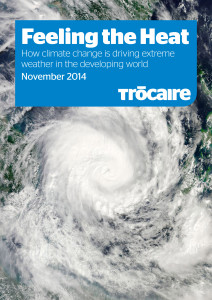 A new report from Trócaire published to mark the first anniversary of Typhoon Haiyan warns that at least 75 million people in the Philippines are directly at risk from the effects of climate change.

These include rising sea levels, storms and damage to agriculture.

‘Feeling The Heat’ is a new analysis of climate change’s impact on the developing world.

It warns that climate change threatens all the gains made against poverty in the developing world and will cause 250,000 otherwise preventable deaths.

The report also shows that people in Ireland emit as much carbon into the atmosphere as over 400 million of the world’s poorest people.

The report was launched on Wednesday at the Science Gallery in Trinity College Dublin by the Minister for the Environment, Alan Kelly.

‘Feeling the Heat’ is based on a report developed by the Department of Geography in NUI Maynooth.

It provides a comprehensive review of observed changes in climate, climate change projections and impacts in Trócaire’s five programme countries.

It shows how climate change is already affecting food production, water supply, health and many other aspects of peoples’ lives in the Philippines, Honduras, Kenya, Malawi and Ethiopia.

The report points to the future risks in these countries if global temperature rise is not contained and puts forward a series of policy proposals which need to be addressed if Ireland is to play its part in addressing climate change.

Failure to address climate change could see 90% of Malawi’s population put at risk of hunger due to drought, as rainfall in Malawi could fall by as much as 25% by the end of the century.

Elsewhere, floods and storms are reported to have increased in frequency in Honduras, with 65 extreme weather events recorded in the last 20 years at a cost of $4.7bn, while yields from Honduras’ food crops are predicted to drop by up to 10% by 2020 due to increased drought.

Commenting on the report’s findings, Trócaire’s Executive Director, Éamonn Meehan, said “Climate change threatens to undo all the gains that have been made against poverty over recent decades. It is the single biggest threat to humanity but yet the political system has refused to move quickly enough to address it.”

He said ‘Feeling The Heat’ brings home the reality of climate change’s impact on people’s lives.

“Climate change is not just a scientific concept or a threat for the future, it is very real and it is affecting people today.”

According to Éamonn Meehan, “People in Ireland emit an average of 8.8 metric tonnes of carbon each year compared to just 0.1 metric tonne for Ethiopians. Each Irish person is responsible for as much carbon emissions as 88 Ethiopians.”

He further warned that “Ireland is significantly off-track for meeting our 2020 emission reduction targets and the Government has lobbied intensively at European level to reduce our targets for 2030. Given that we are the eighth highest carbon emitter per capita in Europe, and the 35th highest globally, we need to step-up to the plate.”

The Trócaire Executive Director called for “a binding roadmap to guide Ireland towards a fossil-free economy and we need investment in sustainable lifestyles that give people the options they need to reduce their carbon footprint.”

The report is released in the lead up to the first anniversary of Typhoon Haiyan, which resulted in over 6,000 deaths in the Philippines last November.

Amongst the report’s other findings are:
· 90% of the population of Malawi are at risk of hunger due to drought. Rainfall in Malawi could fall by as much as 25% by the end of the century.
· Floods and storms have increased in frequency in Honduras, with 65 extreme weather events recorded in the last 20 years at a cost of $4.7bn.
· Yields from food crops in Honduras will drop by up to 10 per cent by 2020 due to increased drought.
· Rainfall in Kenya has reduced significantly over the last 30 years and temperatures are set to rise by up to 4.5 degrees Celsius by 2100.
· Net economic costs of climate change could be equivalent to a loss of almost 3 per cent of GDP each year by 2030 in Kenya.
· Agricultural output in Ethiopia could fall by as much as 10 per cent as a result of climate change.
· The growing season in Ethiopia has already reduced by 15 per cent as a result of drought.

The full report can be read here: http://www.trocaire.org/sites/trocaire/files/resources/policy/trocaire-climate-change-report-2014.pdf