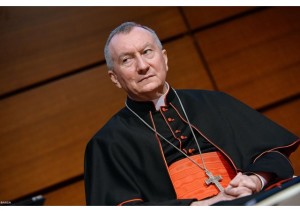 The Vatican’s Secretary of State told the UN Climate Summit this week that climate change is man-made and man’s responsibility.

In his address on Tuesday, Cardinal Pietro Parolin said the international community has a moral responsibility to address climate change.

Referring to Pope Francis and Pope Benedict, Cardinal Parolin said, “the Holy See has often stressed that there is a moral imperative to act, for we all bear the responsibility to protect and to value creation for the good of this and future generations.”

“The scientific consensus is rather consistent and it is that, since the second half of the last century, warming of the climate system is unequivocal,” he stated.

“It is a very serious problem which, as I said, has grave consequences for the most vulnerable sectors of society and, clearly, for future generations,” the Vatican’s second in command warned.

“Numerous scientific studies, moreover, have emphasised that human inaction in the face of such a problem carries great risks and socioeconomic costs,” the Cardinal observed.

“This is due to the fact that its principal cause seems to be the increase of greenhouse gas concentrations in the atmosphere due to human activity.”

“Faced with these risks and costs, prudence must prevail, which requires thoughtful deliberations based on an accurate analysis of the impact our actions will have on the future.”

He said one of the principle elements to have emerged from the more than thirty years of study on the phenomenon of global warming is the increasing awareness that the entire international community is part of one interdependent human family.

“The decisions and behaviours of one of the members of this family have profound consequences for the others; there are no political frontiers, barriers or walls behind which we can hide to protect one member from another against the effects of global warming.”

Referring to Pope Francis’ Apostolic Exhortation Evangelii Gaudium, he said there was no room for the globalisation of indifference, the economy of exclusion or the throwaway culture.

He said if the international community really wishes to be effective, it must implement a “collective response based on a culture of solidarity, encounter and dialogue, which should be at the basis of normal interactions within every family and which requires the full, responsible and dedicated collaboration of all, according to their possibilities and circumstances.”

“The greatest challenge lies in the sphere of human values and human dignity; questions which regard the human dignity of individuals and of peoples are not able to be reduced to mere technical problems.”

He said, “In this sense, climate change becomes a question of justice, respect and equity, a question which must awaken our consciences.”