Home > News > Concern over demolition of churches in China

Concern over demolition of churches in China 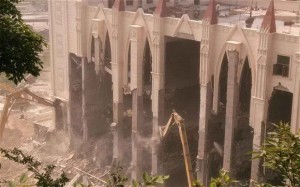 Authorities in China are being accused of operating an anti-Christian campaign following the demolition of Sanjiang church in Wenzhou.

The Protestant church, which is located in a wealthy coastal city, had been saved from demolition in early April when Christians formed a human shield around its entrance.

This latest attack on the church is being seen as part of an anti-church crackdown by communist leaders in Zhejiang province who have been accused of ordering complete or partial demolition of at least ten places of worship.

Another church, a Catholic place of pilgrimage in Wenzhou, has also been damaged.

Government workers used bricks to cover statues portraying moments from the Passion of Christ, including the crucifixion. Statues of Jesus, the Virgin Mary and St Joseph, were also covered from public view.

“All other religious decoration was demolished,” UCA news reported.

“The authorities’ behaviour is reminiscent of the smashing of church property during the Cultural Revolution,” a member of the city’s Catholic community told UCA’s Chinese-language news service.

Four Catholics were beaten and injured by government officials in Wenzhou last week when an argument broke out during the forced demolition of the church, the news agency claimed.

A member of the American agency, China Aid, said the demolition of the Protestant church indicates an escalation of religious persecution in the Chinese province of Zhejiang.

Others called on central government in Beijing to intervene, although experts have stated that Beijing is uneasy at the rapid growth of Christianity in China.

It had been reported that China could overtake Brazil, Mexico and the United States to become the world’s most numerous Christian congregation by 2030.

On 26 January 2014, Pope Francis sent his best wishes to the Chinese, Vietnamese and Korean peoples for the Lunar New Year.

“May the irrepressible yearning for fraternity, which dwells in their hearts, find in the intimacy of the family a privileged place to be discovered, educated and realised. This will be a valuable contribution to the building of a more humane world, where peace reigns,” the Pope said.

Also on the occasion of the New Year, Cardinal Joseph Zen, bishop emeritus of Hong Kong, expressed his concern at the situation in China.

In an interview with AsiaNews he said: “At the beginning of a new year our wishes are that things may go better than in the past. But I can’t help having a sense of impatience seeing that year after year with the passing of time things remain in a state which causes us frustration.”

He added, “Yes in the past year we have two new leaders on the stage, Pope Francis and Xi Jinping. Their initial moves have brought much hope; we may be led to believe that a decisive turning point is in view.”

However, he noted, “Somebody said that Pope Francis likes tango, but it takes two to tango. Can we suppose the same good will in his counterpart?”

Cardinal Zen said the Chinese leader had shown determination in reforming his party and fighting corruption but he is taking his time on other issues such as religion.

“While this our supreme leader takes his time, those under him carry on their work of destruction,” the Cardinal commented.

He explained that with their position of power in dealing with religions, they are destroying not only the religions but also the good name of the nation.

In relation to the Catholic religion he said, “The director of the Religion Affairs Bureau is ‘running’ the Church ever more ostentatiously, not even taking care to save the appearances. The only purpose of their work seems to be ‘enslaving’ our Church (unfortunately with much success) by forcing our bishops and priests to betray their conscience, their faith.”

Aid to the Church in Need in its regional reports stated that while the Church in China is growing, it still remains a minority of just over 1%.

The Chinese constitution guarantees religious liberty, but all religious communities must be registered with the government, which controls all religious activities.

Christians are not allowed to join the Communist Party in power, and so Christians cannot work in a variety of government positions.

Foreign missionaries are also forbidden. Some provinces also have local laws that are more restrictive than those of the central government, and in these areas the Church is isolated and repressed.