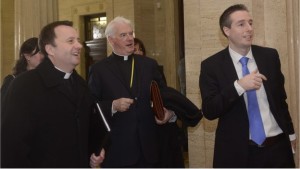 Bishop Noel Treanor and members of NICCOSA with Paul Givan of the DUP. Pic: courtesy bbc.co.uk

Bishop Noel Treanor and members of the Northern Ireland Catholic Commission on Social Affairs held meetings at Stormont on Tuesday to discuss the proposed Freedom of Conscience Amendment Bill.

The NICCOSA representatives met a delegation from the DUP, including First Minister Peter Robinson, at the invitation of Paul Givan MLA as part of the consultation process in respect of his private members bill.

They also met with representatives of the SDLP including party leader, Dr Alasdair McDonnell MLA, MP.

Following these meetings, Bishop Noel Treanor called for a more just and reasonable accommodation of religious belief when conflicts between goods and services legislation and freedom of conscience arise.

Paul Givan is seeking to bring in a conscience clause into equality legislation.

His move follows the Equality Commission’s legal action against a Christian bakery, Ashers Baking Company of Newtownabbey Co Antrim, after it refused to bake a cake with a pro-gay marriage slogan.

The Freedom of Conscience Amendment calls for a “reasonable accommodation” between the rights of people not to be discriminated against and the right to freedom of conscience of religious believers.

Speaking after the meetings, Bishop Treanor said, “As part of the democratic process, we are glad to take the opportunity to discuss with our legislators, in a calm and respectful manner, how to find a more just and reasonable accommodation for religious belief when conflicts between goods and services legislation and freedom of conscience arise.”

He said it was important that politicians accept there is a real problem that needs to be addressed.

“Our laws as they stand are having an unjust and disproportionate impact on those of religious faith. It is important that they don’t just ignore the situation but seek ways of addressing it and of giving greater recognition to freedom of conscience and religion as a fundamental human right and a cornerstone of a diverse and pluralist society.”

Last December the Church announced it was cutting its links with the Catholic adoption agency in Northern Ireland following 2012 legislation which required it to allow unmarried and same-sex couples to adopt children.

On Tuesday, Bishop Treanor questioned whether it is “acceptable in a genuinely just, tolerant and pluralist society that one group are threatened with fines, imprisonment, losing their business or job, or in the case of the Catholic Church, losing public funding for long established adoption agencies and other charitable services that we provide, in the name of providing equality for another group? It is as if we have swapped one form of discrimination for another!”

He continued, “It is just to have a situation where one group of people are told ‘you are out’ of a particular business or ‘you need not apply’ for a particular job or that ‘you may not apply for public funds’, simply because they hold the perfectly rational belief that marriage is between a woman and a man and that sexual relationships are reserved in their dignity and purpose for this form of married relationship?”

He said that such prejudice and discrimination against any other category of people in our society would not be tolerated.

Public representatives, he added, have a responsibility to ensure that discrimination against those with perfectly rational religious views will not be tolerated either.

Another member of the NICCOSA delegation, Deirdre O’Rawe commented after the meetings, “We do not want to see any change to the law that would lead to unfair discrimination against any individual or community. That would be contrary to our Christian beliefs.”

She said any change to the law in this area has to be very carefully defined so that people cannot use transient, superficial or spurious claims of religious conscience as an excuse for discrimination.

“While we support the general objective behind the proposed Freedom of Conscience Amendment Bill we believe it needs to be very carefully assessed to ensure it does not create exceptions to goods and services legislation that are too wide,” she said.

Dr Nicola Brady added that it was “possible for our legislators to find the right balance in this area”.

She said that in the meetings NICCOSA had stressed the need for people from different perspectives to work together to build a more compassionate and caring society in which every individual and community can flourish.

“We also spoke about the need for a calm and mutually respectful debate in all of this, where we listen carefully to each other and try to understand each other. That is part of our Christian faith too.”