Home > News > ‘Church must reflect the importance of women’

‘Church must reflect the importance of women’ 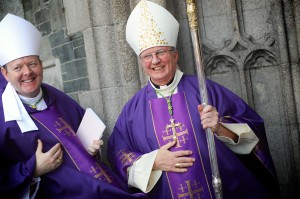 The Bishop of Derry has warned the Church that it is “failing in its mission” by not reflecting the importance of women in its theology.

At a Mass on Thursday to mark the quincentenary of St Teresa of Avila’s birth at the Carmelite Church in Dublin’s Clarendon Street, Bishop Donal McKeown said, “The Church has a huge job to do in learning to celebrate the male and female experience of the divine.”

He recalled Pope Francis’ words to journalists on the way back from World Youth Day in Rio, when he said, “I believe that we have not yet come up with a profound theology of womanhood in the Church.”

Referring to the Spanish Saint’s contribution to the Church, the Bishop of Derry said St Teresa, through her renewal movement with St John of the Cross, “showed how the distinctive male and female perspectives are complementary and enrich one another rather than being mutually exclusive”.

“As someone proud to be a woman, she would struggle with the idea that gender is mainly a social construct – or that the presence of male and female figures is insignificant in the education of children.”

St Teresa, he said, is and was “a surprisingly modern woman, challenging the dominant ideologies of her own time and of ours”.

This year, on the anniversary of Teresa’s birth, we celebrate a remarkable woman who – not because she sought power or fame, but because she was convinced in the depths of her humanity about the love of God – left an indelible mark on her time and on subsequent centuries.

Bishop McKeown recalled some of St Teresa’s famous sayings such as ‘Let nothing disturb you/ let nothing frighten you’ and ‘Whoever has God lacks nothing’.

He also noted that the Saint needed great courage and calm in her life as she faced much opposition – from ill health, from many of the ecclesiastical powers of her time and from the simple fact that she was a woman, living through the turbulent years when Martin Luther and John Calvin were preaching elsewhere in Europe and overturning the old order.

“But Teresa remained faithful to her own Reformation movement in Spain – but succeeded in keeping that change within a united Church,” he highlighted.

She ensured that a feminine experience of God and of Church was mainstreamed and accepted as being as true as any male perception.

She was and remains a strong voice for the role of the Transcendent in the healthy individual and a healthy society. She was clear that the God in whom she believed walks among the pots and pans.

Religious faith in the footsteps of the Incarnate Jesus does not shy away from encountering the concrete realities of daily life.

In his homily, Bishop McKeown said that today the great and good line up to profess their faith in unfaith. “However, it seems to me that, with the removal of God from the picture, centre stage has now been taken, not by the welfare of the human race but by the wishes of the adult.”

“Thus the proposed change to the Eighth Amendment wishes to prioritise the adult will over all else. St Teresa would certainly have understood the difficulties of human life. But the presumed infallibility of the adult ego is a shaky basis on which to decide all truth.  In that context, a want becomes a need and a right. Teresa the woman would have found that very strange,” he said.

He said St Teresa’s concrete spirituality would also point out that the marginalisation of transcendence leads us to neglect of the inward journey and to an excessive focus on the external.

“Thus, far from being encouraged to undertake the risky inwards journey, we are told that ‘life is a beautiful sport’ (Lacoste) or to seek wholeness in the phrase “Let’s feel good.” (Boots). Salvation from a bottle or from a sparkling trinket is a poor substitute for the deeply human search that is a profound, concrete spirituality.”

Enslavement to consumerism may suit the market but it starves and warps the human heart that wants to dream and to believe that each human life is precious, Dr McKeown warned.

He called for more contemplatives, so that we do not become enslaved to those whose baubles attract the eye but fail to nourish the heart.

Belief in the capacity for faithfulness is a liberating conviction and not an enslaving one, he said and added the ability to share our lives/journey with human others is a sign of maturity, not of weakness.