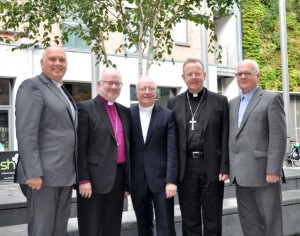 Church leaders in the North have welcomed the political accommodation and wide ranging agreement that has been reached and the publication of the Stormont Agreement.

In a joint statement, the Churchmen responded to the Implementation Plan entitled ‘A Fresh Start’, involving political parties in Northern Ireland and the governments of the United Kingdom and Republic of Ireland.

“As Church leaders, we came together in September and called on our elected representatives to place at the heart of their discussions ‘an awareness of their shared responsibility for the common good’,” they said in their statement.

“We recognise that everyone involved in the negotiations will not have achieved all that they wanted in this agreement, nor will everyone who reads it be fully content with every aspect of it. Such is the nature of any agreed accommodation.

They also expressed the hope that the accommodation reached would be the basis for beginning to restore hope to those who are struggling and re-establish the trust that has been slowly ebbing from our political institutions.

“As Churches we will study the detail of The Stormont Agreement and Implementation Plan and will no doubt comment further. We also encourage it to be carefully and widely read across the community and given fair and thorough consideration.”

The statement was signed by:

Rev Brian Anderson, President of the Methodist Church in Ireland