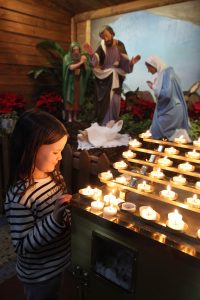 The plight of homeless, migrant and refugee families should be in our Christmas thoughts and prayers, Archbishop Eamon Martin said in a message of solidarity with the marginalised this Christmas.

Addressing the faithful in his Christmas homily at St Patrick’s Cathedral Armagh, the Primate of All Ireland also expressed concern for families caught up in war or violence in various parts of the world.

“Christmas is such a special time for family – the Christmas hugs and smiles, the welcomes home, all those cards, calls and messages are glimpses of the joy of love that sings at the heart of family and which is, in turn, such a joy for the world!”

But, by choosing to be part of a human family, God took to Himself the pain and struggles of family life, he said.

“At Christmas time we are especially conscious of families who have been bereaved this year, or who have someone in hospital or in care. The plight of homeless, migrant and refugee families is also in our Christmas thoughts and prayers, as well as the anguish of families caught up in war or violence in various parts of the world.”

Archbishop Martin said he was always conscious of the sadness in many homes at Christmas time, when the hurts and feelings of family regret, disappointment, separation, or even anger, can resurface painfully at this time of the year.

In Dublin, Archbishop Diarmuid Martin told the congregation at Christmas Mass in St Mary’s Pro Cathedral, that even the most hardened heart cannot but feel a certain sense of tenderness by the Nativity.

“The stark simplicity of the birth of a child in the most humble of circumstances never fails to remind us of innocence, poverty and of our dependence on others.”

He said most people, despite the rampant commercialisation of Christmas that dominates society for months each year, are captured by the deeper message of Christmas on Christmas night.

“All of us can work to bring this message of Christmas to anywhere where darkness prevails.”

The Archbishop warned that darkness has not yet been dispelled and that we are living in a world where peace is more than fragile, where conflicts rage and fester and where the responses are often phrased in a language that is inflammatory rather that words and deeds of peace. 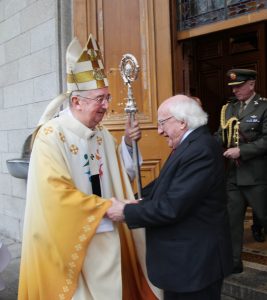 “There are new signs of violence in Ireland. There is the arrogant violence of that business of death, the drug world, which is unscrupulous and despicable. There is the continued violence of stabbings,” Dr Martin warned.

“In these days, in particular, I ask myself how we can celebrate this beautiful night of peace and not remember the anxieties of many elderly men and women living alone and who have now begun to fear the night for their own safety. How can we celebrate the joy childhood when children are being, trafficked, exploited, and abused and homeless?”

However, the Archbishop also stressed that good can prevail. “Christmas makes our hearts different, even for a moment. Doors are opened, feuds are reconciled, old enmities are put aide. This child who is born touches our hearts with a tenderness that we so easily hide in other moments.”

“There was no room in the inn. The story of the birth of Christ is the story of the poverty of indifference, poverty where others do not notice. Yet even in the poverty of the birth of Jesus, there are the signs of human warmth. The simple swaddling clothes keep the child protected and warm; even the manger is a place of protection and nature and the animals are sensitive.”

The Archbishop of Dublin appealed for “courageous and decisive plans and sufficient funding to overcome the suffering and the deprivation of those who live on the precarious margins of society”.

He added that people also need the comfort of simple human warmth. “It costs nothing but our effort. “

“We need a society where politics and economics play their part but we also need a society – indeed a Church – where gladness is made greater, joy is increased and where the many who today live in darkness encounter a great and a welcome light and where they enter “the jealous love of our God” through the way we live.”

In Christ Church Cathedral in Dublin, Archbishop Michael Jackson underlined that Christmas asks believers to combine right thinking and right doing and to continue this long after the festive season has passed.

In his Christmas Day sermon, which he delivered during the Festival Eucharist, the Church of Ireland Archbishop of Dublin said that in a democracy, it is important that respectful discourse continue to be developed and enriched.

“It takes all parties to do this intentionally in a world of increasingly self-generated communications; it is important that individuals be furnished with sufficient objective information to make decisions and that, while lobbyists inevitably will seek to influence the thought pattern of voters, the voters themselves create and sustain the freedom to decide without undue influence.”

“It seems important also, in the overall perspective of civic life, that religion as a system should not become the predictable mouthpiece of the negative; it seems equally important that the secular reaction to religion engage with its presuppositions while at the same time, in all likelihood, disagreeing with them; and furthermore it seems equally important that religious people take the scruples and the principles of secular people seriously and attentively,” he said.