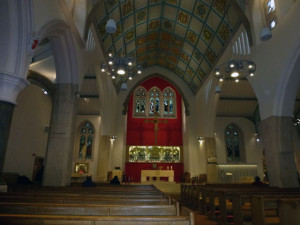 A Catholic Church which has been one of the most popular destinations for the Irish community in London is planning a novel celebration to mark its 150th anniversary this summer.

The Sacred Heart Church on Quex Road in Kilburn in North London is appealing to couples who married there for copies of their wedding photos to be used in a display to mark its 150th anniversary.

Speaking this week to Catholicireland.net organiser, Ronan Lavery, who married last year in the church himself said, “We are hoping to reconnect with couples who got married in the Church down through the years. We would love to be able to get copies of photos of anybody’s special day for inclusion in a display in the church, and to invite people to a celebration of marriage through the years in the church.”

The special celebration will take place on Sunday 12 July at 12:30pm and it is part of a year-long series of celebrations.

Couples can renew their wedding vows and are invited to attend a reception in the Mazenod hall afterwards.

The poster for the event says, “You are cordially invited to join us as we remember and celebrate the thousands of weddings that have taken place here over the years. We will take a look back at many of the weddings that took place here, and offer an opportunity for married couples to renew their wedding vows.”

“We welcome and will pray for those whose marriages may have ended, through bereavement or separation. We will celebrate and encourage those whose vocation is to the religious or single life.”

“All are welcome to this joyous celebration, where we hope to have many couples who were married in this church, or who live locally and come here to worship.”

In its 1960s heyday, Sacred Heart, Quex Road in north-west London, which was run by the Missionary Oblates of Mary Immaculate (OMI), boasted the largest congregation of any church in Britain and was known locally as Kilburn Cathedral.

There were 13 Masses on a Sunday for the 13,000 who queued to worship here. It was only by incorporating an old Nonconformist hall next door and running extra Masses on the half-hour throughout the day that the parish was able to cope with the numbers.

For hundreds of thousands of Irish emigrants, Sacred Heart, in what was then known as County Kilburn, provided a home away from home.

The official opening of the 150th year celebrations took place on 21 February last, when Sacred Heart began the year-long celebration with a visit from the American Superior General of the OMIs, Fr Louis Lougen.

This event marked the arrival of Fr Robert Cooke on 1 February 1865, who arrived outside the nearby Cock Tavern and, confronted by what were then green fields, conducted what was said to be the first Mass in the area since the Reformation.

Just five people knelt with him, but it was the beginning of the church that stands in Kilburn today.

Fr Michael O’Connor, a priest at Sacred Heart today, told CatholicIreland.net, “It has a long history as an immigrant church, welcoming people into the area and helping them integrate. In the 50s and 60s, it was a place where many Irish immigrants came, so many we would hold 14 masses on Sundays. It’s changed dramatically since then. We serve about 34 different nationalities now.”