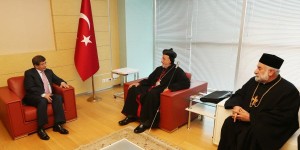 The Turkish government has given the green light for the building of the first Christian church in the country since the end of the Ottoman Empire in 1923.

The decision came during a meeting of Prime Minister Ahmet Davutoğlu with representatives of non-Muslim minority communities at the prime ministry’s office in Istanbul, known as the Dolmabahçe Palace.

A government spokesman told AFP: “It is the first new church since the creation of the Turkish republic. Churches have been restored and reopened to the public, but no new church has been built until now.”

The church will be built in the Istanbul suburb of Yesilkoy on the shores of the Sea of Marmara, which already has Greek Orthodox, Armenian and Catholic churches.

It will serve the city’s tiny but ancient Syriac community, which nationally now numbers less than 20,000, and most of whom live mostly in Anatolia in the southeast of the country. They tend to be either Orthodox or Catholic.

Turkey, which once had large Christian minorities, is now 99 percent Muslim, and now just one percent of the Turkish population of 76 million are non-Muslim.

However, the Christian population in Turkey has grown in recent years due to the fighting in Iraq and Syria, which has forced Christians in those countries to seek refuge in neighbouring Turkey.

Critics of the ruling AKP party have accused it of trying to Islamicise a country which has prided itself on being a secular republic since the collapse of the Ottoman Empire in 1923.

However, as part of its bid to join the EU, the Turkish government has made some efforts to widen minority rights and return some seized property including churches and restore these churches, monasteries and synagogues to their faith communities.

The church will be built on land given by the local council and paid for by a Syriac group, the government spokesman, told AFP.

This year marks the centenary of the 1915-1918 Armenian genocide which destroyed the two million-strong Armenian community in Turkey through massacres, forced deportations and forced conversions.