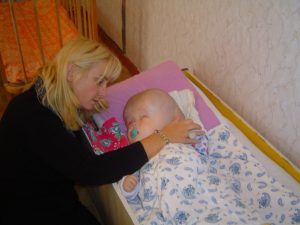 Fiona Corcoran of Greater Chernobyl Cause with Anwar, an abandoned child.

Church bells across Cork city will today chime thirty times to mark the 30th anniversary of the Chernobyl nuclear disaster.

The bell-ringing is part of an ecumenical commemoration service organised by the charity the Greater Chernobyl Cause in association with Cork City Council.

The service, which will take place in Bishop Lucey Park, will be opened by the Lord Mayor of Cork, Cllr Chris O’Leary.

Attendees will include HE Maxim Peshkov, the Russian Ambassador to Ireland, Serhii Romanenko, the Chargés d’Affaires at the Ukrainian Embassy, personnel from the Navy, Cork City Firebrigade, the Chamber of Commerce, Defence Force, schools and the general public.

This is the sixteenth year the ecumenical service has taken place and the founder of the Greater Chernobyl Cause, Fiona Corcoran, told CatholicIreland.net that this year’s winners of the Evgenia Nesterenko Trophy, Colaiste Pobail Bheanntraí, will be represented.

The Greater Chernobyl Cause works with the poor, ill and desperate in Ukraine, Russia and Kazakhstan. The charity has helped to bring many sick children from areas affected by the Chernobyl disaster to Ireland for recuperation and rehabilitation at adventure camps.

In 2010, a group arrived from the Okhamdayt Hospital and Cancer Centre in Kiev. All were suffering from life-threatening illnesses like cancer, sickle cell anaemia and HIV/AIDS and came to experience, perhaps for the first time, the simple joys of childhood, without compromising any of their medical needs thanks to state-of-the art medical care.

The charity has also supported a rehabilitation centre and new equipment at the main radiological hospital in Kiev. Here they struggle against many of the conditions thought to be directly related to the Chernobyl disaster: cancers, deformities and weakened immune systems which afflict young and old.

Many of the adult patients are so-called liquidators, men and women who formed the army of helpers drafted in to clean up after the explosion but with little protective clothing.

Fiona Corcoran recently met President Vladimir Putin at the Kremlin where he presented her with the Order of Friendship for her humanitarian work in Russia. She is the only Irish person to receive such an accolade.

She has also been awarded Ukraine’s most important humanitarian honour, the Order of Princess Olga. The award was given in recognition of over twenty years of charitable work that began in the aftermath of the Chernobyl disaster in 1986.

That work continues to this day, right across some of the most notorious nuclear-affected areas of the former Soviet Union and has expanded into Kazakhstan, where the USSR carried out up to 500 nuclear tests over forty years.

It was in 1995 that Fiona, who then worked in banking, got involved in the Chernobyl issue. “I can never forget the suffering of four little children who developed leukaemia and were airlifted to the Mercy Hospital in Cork and others brought to Ireland since suffering from thyroid cancer linked to the disaster.”

The charity’s humanitarian work in Kazakhstan has come to the aid of some desperate elderly whom Fiona Corcoran found in a dilapidated hospice in the north-eastern city of Semipalatinsk.

Since then, the Greater Chernobyl Cause has transformed the thirty elderly men and women’s lives, paying for a regular supply of healthy food (to replace the gruel that was an unappetising staple), proper bedding, winter clothing and medical supplies.

More recently the charity built an entirely new hospice in the grounds of the city’s main hospital that will see some of the poorest men and women imaginable housed in warmth and dignity.

Fiona received an Honorary Diploma and medal at Ak Orda Palace, she is the first individual from the West to be honoured with this prestigious award.

Her task is a formidable one, but this is a woman who has already altered the lives of many Kazak orphans beyond recognition.