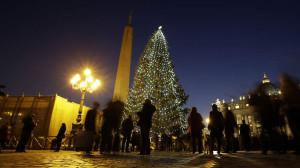 The lights bedecking the 25 metre Christmas tree in St Peter’s Square are a reminder that Jesus is the light of the world, Pope Francis has said.

In his first advent and Christmas as pontiff, the Argentinean thanked the people of the German town of Waldmunchen, near the Czech border, who gifted the enormous fir tree and other smaller trees to the Vatican.

Meeting with a group representing Waldmunchen, the Pope thanked them and said that the tree would testify to the “spiritual closeness and friendship that unites all of Germany, and particularly Bavaria, with the Holy See.”

“This tree is international,” the pontiff told the 350 pilgrims who travelled to the Vatican for the tree-lighting ceremony.

He wished them and the community of Waldmunchen a happy Christmas, and asked them to pray for him.

The Pope also told them that the tree would be admired by many Romans, pilgrims and tourists visiting St Peter’s Square during the period of Advent, in which “there resounds in every place the joyful proclamation of the angel to the shepherds of Bethlehem … who were surrounded by a great light.”

Pope Francis continued, “Today too, Jesus continues to dispel the shadows of error and sin, and brings humanity the joy of the brilliant divine light, of which the Christmas tree is a sign and a memory.”

“May we let ourselves be surrounded by the light of truth, so that the joy of the gospel may fills the hearts and lives of all who encounter Jesus,” he said.

According to CNS, Cardinal Giuseppe Bertello, president of the commission governing Vatican City State, told the pilgrims that while the Christmas tree was a northern European tradition, it was a custom Pope John Paul II brought to the Vatican in 1982.

“The tree, in every culture, is a symbol of life,” the cardinal said. A Christmas tree is a reminder that “the Lord comes to give us his life. Let us welcome him in our hearts and, in the glow of its light, let us bring him to the world,” he said.