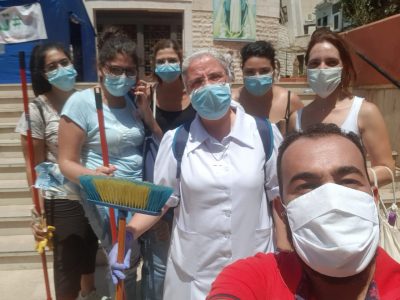 According to Catholic charity, Aid to the Church in Need (ACN), Christians in Beirut have responded with defiance amid reports that groups seeking to profit from the recent explosion are trying to persuade them to sell up and leave.

Estimates have suggested that 300,000 families were displaced by the blast on 4 August, but Monsignor Toufic Bou-Hadir, an ACN project partner, has described how people, including the elderly, are choosing to keep their damaged homes rather than accept offers to sell their properties.

In an interview with ACN, Mgr Bou-Hadir said: “There are people trying to profit from this catastrophe and buy land and homes from the Christians. People want to stay. A number of the old people – and younger ones, too – are staying in their homes, even ones that are damaged. With all respect to people who hold other religious beliefs, we cannot sell Christian homes to others. We do not want to change the demography. The land does not only have material value. It is our dignity. It is where we have our roots.”

Stressing that Christian districts of Beirut bore the brunt of the explosion, Mgr Bou-Hadir said that in the past few days Church leaders had worked with politicians to frustrate land-grabbers by passing legislation preventing the faithful from selling their homes. Meantime, nearly 300 young people packed Beirut’s damaged Maronite Cathedral for a night vigil where they heard Archbishop Paul Abdel Sater call on them not to lose faith in their future in the city, despite the explosion on 4 August.

Mgr Bou-Hadir, who is director of the Maronite Patriarchal Commission for Youth, praised the young people, who he said had been working hard as volunteers to clear the streets of debris caused by the explosion and provide emergency supplies to families. ACN has also agreed an emergency package to provide food to 5,000 families.

Mgr Bou-Hadir stressed that Beirut’s road to recovery would be long and complicated, with reports that 200 people were killed and 6,000 injured. He said: “I want to thank Aid to the Church in Need for helping to provide essential support. To begin with, there was just shock, people were just focused on trying to survive. Now people are taking in the full impact of what has happened and they are realising just how hard and difficult the future will be, but our hope is Christ.”