Home > News > Christian unity shouldn’t be “for one week only”

Christian unity shouldn’t be “for one week only” 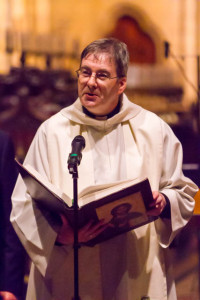 The first catholic chairperson of the Dublin Council of Churches has urged members to make the Week of Prayer for Christian Unity “something more than coming together for moments of praise”.

In his sermon for the inaugural service of the Week of Prayer for Christian Unity 2015, Fr Damian McNeice urged his sisters and brothers in other Christian Churches not to allow this time to be “for one week only” as it is for a film or a show.

He also said they mustn’t return unchanged when they went back to their various Christian communities.

At the liturgy in St Bartholomew’s Church of Ireland in Dublin, the priest highlighted that the Christian Churches in 2015 find themselves “on the cusp of many important anniversaries” which will require the “working of our Churches together for what Pope John Paul II referred to as the ‘healing of memories’.”

“Ecumenically – there are preparations for the 150th anniversary of the founding of the Salvation Army in July, for the ‘pan-Orthodox’ Synod in 2016, Pope Francis’ current Synod on the Family and a forthcoming document on ecology, and the 500th anniversary of the Reformation coming in 2017.”

Fr McNeice paid tribute to last week’s attendance of many representatives of the Dublin Council of Churches at a Eucharist organised by Archbishop Martin in solidarity with the People of France, which had also recognised the suffering in Northern Nigeria and Pakistan.

“It is in that context that we are together to inaugurate another Week of Prayer for Christian Unity,” he said.

He also referred to Orthodox theologian, Paul Evdokimov, who wrote, “It is not enough to say prayers, one must become, be prayer, prayer incarnate. It is not enough to have moments of praise. All of life, each act, every gesture, even the smile of the human face, must become a hymn of adoration, an offering, a prayer. One should not offer what one has, but what one is.”

He concluded by challenging those gathered on Sunday with questions drawn from the Gospel of the day:
“Where is it ‘necessary’ for us to walk now? Where is our necessary Samaria? How will the Lord astonish us with newness? Will we allow Him? What unnecessary buckets will we have to put down?”