Home > News > Every child should have its ‘mammy and daddy’

Every child should have its ‘mammy and daddy’ 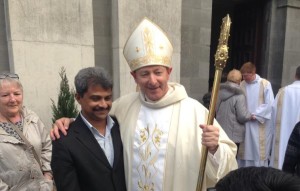 The country’s newest bishop has issued his first letter to his flock in the diocese of Waterford & Lismore urging them to vote in the forthcoming marriage referendum which he emphasised “has huge implications”.

In his letter at the weekend, Bishop Phonsie Cullinan questioned whether a Yes vote is pandering to the desires of adults over the rights of children.

“The message we are bombarded with is that we are all equal. This is true – we are all equal in dignity but we are not all the same. Men and women are different,” he said.

The new bishop underlined that children are different to adults just as the union of a man and a woman is different to any kind of relationship between two men or two women.

“A man and a woman join in bringing new life into the world and every child has a right to a father and a mother (be they natural or adoptive),” he stated.

He told his flock that “common sense alone tells us that every child should have its ‘mammy and daddy’. This has been the way since the dawn of civilisation in every culture and on every continent”.

Bishop Cullinan underlined that since neither the Church nor the State invented marriage, neither can change its nature.

If the referendum on 22 May is passed it will mean that according to the highest law of the land a ‘marriage’ between two men or two women will be equal in all respects to a marriage between a man and a woman, he warned.

The amendment will give constitutional approval to the recent Children and Family Relationships Act which proposes to remove all mention of terms like ‘father’ and ‘mother’ and make all ‘family’ types the same, the new prelate said.

Acknowledging that family life in Ireland is already under pressure, the Bishop said he saluted all lone parents who, often heroically, bring up their children is tough circumstances.

He questioned if the amendment would make family life better or worse.

Of the 193 countries in the United Nations only 17 permit same-sex marriage. “That’s fewer than 9%, the international majority is not in favour of it,” he emphasised.

“Please do not think I am in any way critical of homosexual people whom I care for as I do everyone. Christ calls us to love everyone and treat all with equal compassion and respect,” Bishop Cullinan appealed.

He highlighted that “there are many homosexual people who do not agree at all with this amendment”.

Bishop Cullinan posed a number of questions for people to think about:

– Will parents who hold that marriage is only between and man and woman be free to teach this to their children?

– Will every school, Catholic, Protestant or Muslim, etc., be free to teach according to its ethos?

– Will people who work in adoption agencies and other jobs dealing with the public be free to act according to their conscience?

– Will the terms ‘father’ and ‘mother’ have any real meaning in the future?

He concluded by stating that everyone wants what is best for society and for our children. “But let us consider very carefully what exactly is best.”