UN chief to travel to Tipperary to accept award 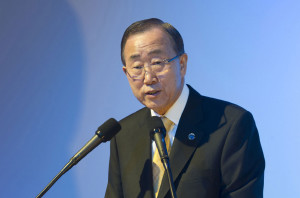 The UN secretary General Ban Ki-moon will accept the Tipperary International Peace Prize in person in Ireland next Sunday.

Mr Ban will accept the prize at a ceremony at Ballykisteen Hotel and Golf Resort in Co Tipperary on 24 May.

The wife of the South Korean Secretary General, Yoo Soon-taek, will also travel to Tipperary for the ceremony.

The 70-year-old has been UN Secretary General since 2007 when he succeeded Kofi Annan.

He beat a host of international figures who had been short-listed for this year’s prestigious prize, including Irish homeless campaigners Fr Peter McVerry, Sr Stanislaus Kennedy and Bro Kevin Crowley.

Speaking to CatholicIreland.net, Peace Convention secretary Martin Quinn who will MC the event explained, “We are honouring Mr Ban for his leadership in mobilising the international community to address climate change, forge a new development agenda and respond to a series of grave conflicts.”

He added, “At a moment of division, he has sought to be a bridge-builder; in a period of economic upheaval, he has striven to give voice to the world’s poorest and most vulnerable people; and in a world of deepening interconnectedness, he has pursued wide-ranging efforts to adapt the United Nations to face a new generation of challenges and threats.”

Speaking last February when he was first announced as the winner of the award Mr Ban said, “I am deeply honoured by this recognition from the Tipperary Peace Convention.”

He added, “I see this award, above all, as a tribute to the brave and dedicated women and men of the United Nations working every day to advance peace, development and human rights around the globe.”