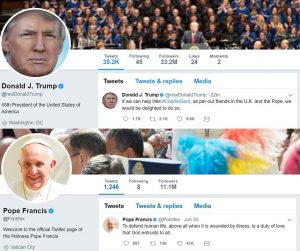 The bishops of England and Wales have pledged prayers for Charlie Gard and his parents following their decision to end their legal fight for experimental treatment in the US for their terminally ill baby son.

On Monday, a lawyer for Chris Gard and Connie Yates told the High Court in Britain that “time had run out” for their 11-month-old son, ending a 5-month legal battle.

They decided to withdraw their legal challenge after Dr Michia Hirano, a professor of neurology in the US who had offered to provide the experimental treatment to Charlie, told them it was too late and wouldn’t work.

The infant’s mother Connie Yates told the court that she “only wanted to give him a chance of life”.

Great Ormond Street Hospital (GOSH), where Charlie was being treated, had argued that his life support should be switched off as his condition was terminal and it would prevent him suffering further.

She added, “a whole lot of time has been wasted” and she said she hoped Charlie’ s life would not be in vain.

Addressing her son, Ms Yates wept as she said, “We are sorry we could not save you.”

In a statement, a spokesperson for the Bishops’ Conference of England and Wales expressed their deepest sympathy and compassion for Chris Gard and Connie Yates and for their son Charlie.

“It is some weeks now since Pope Francis said that he was following with affection and emotion the case of little Charlie Gard and expressed his own closeness to his parents.”

The Pope prayed, hoping that their desire to accompany and care for their own child to the end would not be ignored.

“Indeed, it is for Charlie, his parents and family that we all pray, hoping that they are able, as a family, to be given the support and the space to find peace in the days ahead.”

The bishops said the parents’ farewell to their tiny and precious baby touched the hearts of all who, like Pope Francis, have followed this sad and complex story.

“Charlie’s life will be lovingly cherished until its natural end,” the bishops said.

They also paid tribute to all the medical staff involved in Charlie Gard’s case saying, “At this moment it is important to remember that all involved in these agonising decisions have sought to act with integrity and for Charlie’s good as they see it.

“The professionalism, love and care for severely ill children consistently shown at the Great Ormond Street Hospital is also to be recognised and applauded.”

In court, the judge criticised those who had expressed ignorant opinions on the case, specifically on social media.

“A lot of things have been said by those who know almost nothing about this case but feel entitled to express opinions,” Mr Justice Francis said.

He also hit out at the abuse which had been directed towards medical staff at Great Ormond Street Hospital.

The £1.3 million in donations raised by Charlie Gard’s parents to fund his treatment in the US will now be used to set up a foundation.