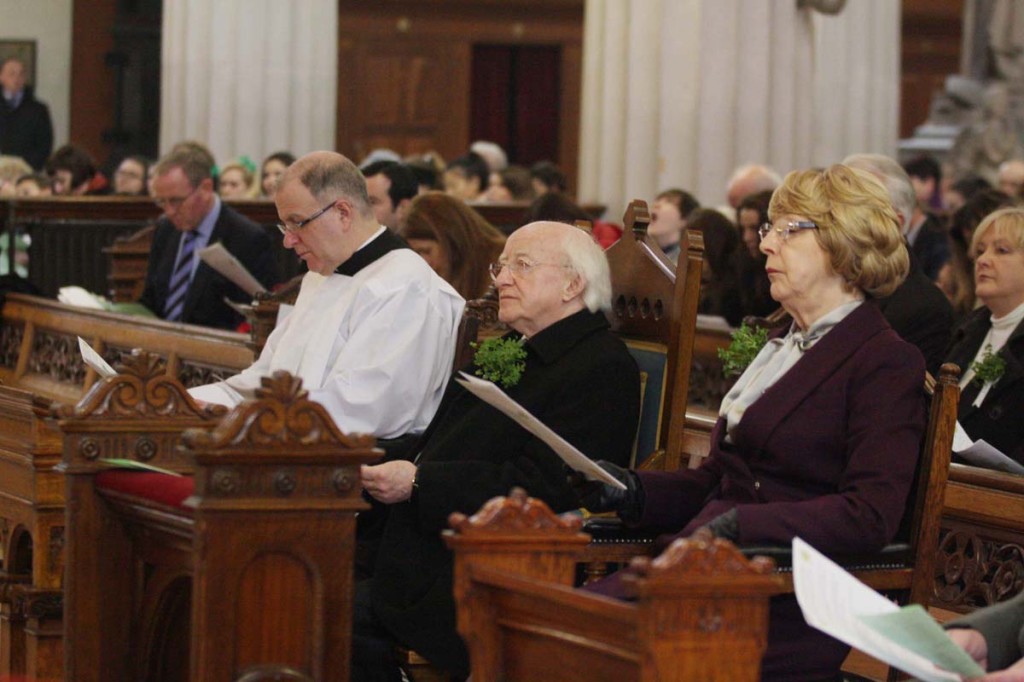 Mass for St Patrick’s Day with President Michael D Higgins and Mrs Sabina Higgins at the Pro Cathedral in Dublin.

The country’s bishops have urged people not to forget that St Patrick’s Day is a holy day of obligation and that the faithful must attend Mass.

In a statement issued on Wednesday, following their spring general meeting in Maynooth, the hierarchy said the best way to celebrate St Patrick’s Day is by going to Mass.

They reminded Catholics that they are obliged to honour their patron saint in this way.

The hierarchy also reminded the faithful that the celebrations were taking place in the context of the ongoing economic recession and that the downturn had resulted in “domestic heartbreak throughout Ireland for many individuals and families due to the pressure of unemployment and emigration.”

They pledged to pray through the intercession of the Saint next Monday for the faith and well-being of the people of Ireland.

Encouraging people to think about migrants and the difficulties they face, the bishops reminded people that St Patrick was a 5th century migrant who had had to deal with many of the same challenges Irish people struggle with when living and integrating in new cultures.

The bishops encouraged people to pray for migrants at home and abroad who are facing difficulties arising from displacement and poverty.

Prayers were also asked for peace in the Ukraine, especially for those who had suffered there in recent weeks, and that there would be a just resolution to the dispute.

They called on the Government to increase its resettlement commitment to victims from the Syrian conflict to at least 300.

Recognising the scale of the current crisis in Syria and the desperate plight of Syrian refugees, the Bishops’ Conference said the Government needed to increase its resettlement commitments to victims of this war.

While the Government has informed the United Nations Refugee Agency that it will accept 90 Syrian refugees this year, the bishops called for this figure to be increased to at least 300 and that the welfare and protection of children be prioritised in any resettlement programme.

Looking at the situation in Syria, they said daily life for children there “is treacherous”.

Recruitment for combat, detention with adults and their use as human shields are just some of the atrocities against children in Syria as reported by the United Nations.

“By their very nature, children constitute some of the most vulnerable Syrian refugees that Ireland and other countries in Europe have committed to re-settling in response to an appeal by the UNHCR to relocate 30,000 of the most at risk refugees,” the bishops stated.

Syrian children, and families, are not alone in seeking safety and refuge In Ireland. Yet, hope has often been in short supply for many asylum seekers already in Ireland.

They warned that “More than one in three residents in direct provision has been waiting for more than five years for a final determination of their claim with their lives on hold. One third of all asylum seekers are children.”

“Living for prolonged periods in this institutionalised environment is not appropriate for children and can inhibit their healthy growth and development,” the bishops’ conference warned.