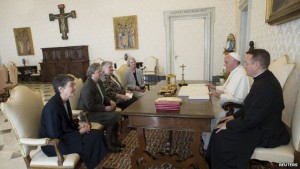 The Vatican announced unexpectedly on Thursday that the Congregation for the Doctrine of Faith’s oversight of the main leadership group of US nuns has been accomplished.

Officials of the Congregation for the Doctrine of the Faith (CDF), Archbishop Peter Sartain and representatives of the Leadership Conference of Women Religious (LCWR) met in the Vatican on 16 April.

The CDF appointed Archbishop Sartain in 2012 to oversee the oversight programme after it criticised the LCWR, accusing its work of containing “a prevalence of certain radical themes incompatible with the Catholic faith.”

The standoff between the nuns and the CDF prompted the LCWR, which represents the vast majority of women religious in the US, to hit back at Cardinal Müller’s department in June 2012 sayings its move against the LCWR was “based on unsubstantiated accusations and the result of a flawed process that lacked transparency.”

On Thursday, Archbishop Sartain and LCWR representatives presented a joint report on the implementation of the CDF Doctrinal Assessment and Mandate of April 2012.

The joint report outlines the manner in which the implementation of the Mandate has been accomplished.

According to the Vatican’s press office, the CDF accepted the joint report, marking the conclusion of the Doctrinal Assessment of LCWR.

Following the meeting, Cardinal Müller said, “At the conclusion of this process, the Congregation is confident that LCWR has made clear its mission to support its member Institutes by fostering a vision of religious life that is centred on the Person of Jesus Christ and is rooted in the Tradition of the Church. It is this vision that makes religious women and men radical witnesses to the Gospel, and, therefore, is essential for the flourishing of religious life in the Church.”

The President of the LCWR, Sr Sharon Holland, IHM, who was unable to attend the meeting, commented, “We are pleased at the completion of the Mandate, which involved long and challenging exchanges of our understandings of and perspectives on critical matters of Religious Life and its practice.”

“Through these exchanges, conducted always in a spirit of prayer and mutual respect, we were brought to deeper understandings of one another’s experiences, roles, responsibilities, and hopes for the Church and the people it serves. We learned that what we hold in common is much greater than any of our differences.”

Archbishop Sartain added, “Over the past several years, I have had the honour of working with LCWR officers and meeting a large number of LCWR members through the implementation of the Mandate.”

“Our work included the revision of LCWR Statutes; review of LCWR publications, programs and speakers; and discussion of a wide range of issues raised by the Doctrinal Assessment, LCWR, and the Bishop Delegates. The assistance of CDF officials was essential to the great progress we made.”

“Our work together was undertaken in an atmosphere of love for the Church and profound respect for the critical place of religious life in the United States, and the very fact of such substantive dialogue between bishops and religious women has been mutually beneficial and a blessing from the Lord.”

“As we state in our joint final report, ‘The commitment of LCWR leadership to its crucial role in service to the mission and membership of the Conference will continue to guide and strengthen LCWR’s witness to the great vocation of Religious Life, to its sure foundation in Christ, and to ecclesial communion.’ The other two Bishop Delegates and I are grateful for the opportunity to be involved in such a fruitful dialogue.”

The LCWR leaders later had a 50-minute meeting with Pope Francis as part of their annual visit to Rome.

LCWR Statutes:  The Statutes of the Conference were definitively approved for the first time by the Sacred Congregation for Religious in 1962; a revised text was subsequently approved by the Congregation for Institutes of Consecrated Life and Societies of Apostolic Life on June 29, 1989.

LCWR had initiated a review of the Statutes prior to receiving the Mandate. In response to the 2012 Mandate, a subcommittee representing LCWR and the Bishop Delegates reviewed that document, attentive to the Mandate’s request for greater clarity in expressing the mission and responsibilities of the LCWR as a Conference of Major Superiors under the ultimate direction of the Apostolic See.

Through a collaborative process of mutual learning and of refining several drafts, it was agreed that “the role of the Conference as a public juridic person centered on Jesus Christ and faithful to the teachings of the Church is to undertake through its membership and in collaboration with other sisters those services which develop the life and mission of women religious in responding to the Gospel in the contemporary world” (Statutes, Section 2).

At the conclusion of this drafting and refining process, the subcommittee’s work was considered ready to be submitted to the LCWR Assembly. The 2014 Assembly overwhelmingly approved the text, and it was forwarded to the Apostolic See.  Following a positive review by the CDF, the revised Statutes were approved on February 6, 2015 by Decree of the Congregation for Institutes of Consecrated Life and Societies of Apostolic Life.

Many persons desiring spiritual growth have become readers of various publications. The nature of LCWR publications is intended to address spiritual matters rather than engage in formal theological inquiry.

Nevertheless, because of the vital link between spirituality and theology, and in order to inspire, help evaluate experience as Women Religious, and challenge to growth, publications need a sound doctrinal foundation.

To this end, measures are being taken to promote a scholarly rigor that will ensure theological accuracy and help avoid statements that are ambiguous with regard to Church doctrine or could be read as contrary to it.  This exercise of theological responsibility is for the sake of both Conference Members and other readers.

At the same time, it serves to protect the credibility of the Conference itself as a long-standing canonical entity of the Church.  In addition, a publications Advisory Committee exists and manuscripts will be reviewed by competent theologians, as a means of safeguarding the theological integrity of the Conference.

The Mandate also addressed care in the selection of programs and speakers at General Assemblies and other LCWR-sponsored events. The choice of topics and speakers appropriate to the Conference’s mission and service will be carried out in a prayerful, thoughtful and discerning manner.

As with written publications, LCWR expects speakers and presenters to speak with integrity and to further the aims and purposes of the Conference, which unfold within the wider context of the Church’s faith and mission. When a topic explicitly addresses matters of faith, speakers are expected to employ the ecclesial language of faith.

When exploring contemporary issues, particularly those which, while not explicitly theological nevertheless touch upon faith and morals, LCWR expects speakers and presenters to have due regard for the Church’s faith and to pose questions for further reflection in a manner that suggests how faith might shed light on such issues.

As with publications, this kind of professional integrity will serve the Members well.  Finally, a revised process for the selection of the Outstanding Leadership Award recipient has been articulated.

Other issues addressed by the Mandate:  Over the past three years, considerable time and attention were given to dialogue regarding other matters raised by the Mandate, including the importance of the celebration of the Eucharist; the place of the Liturgy of the Hours in religious communities; the centrality of a communal process of contemplative prayer practiced at LCWR Assemblies and other gatherings; the relationship between LCWR and other organisations; and the essential understanding of LCWR as an instrument of ecclesial communion.

These discussions had their origin in the Mandate and led to clarifying and fruitful conversation.

Conclusion: Our work together in response to the Mandate has borne much fruit, for which we give thanks to God and the gentle guidance of the Holy Spirit.

The very fact of such substantive dialogue between bishops and religious has been a blessing to be appreciated and further encouraged.

The Commitment of LCWR leadership to its crucial role in service to the mission and membership of the Conference will continue to guide and strengthen LCWR’s witness to the great vocation of Religious Life, to its sure foundation in Christ, and to ecclesial communion.