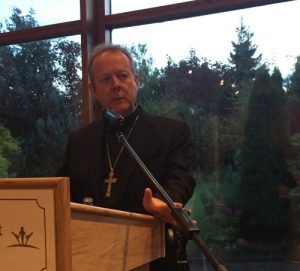 Archbishop Eamon Martin of Armagh has highlighted concerns over current educational policy in Ireland which is promoting a generic model of primary education and diluting the right of parents to have access to a school which unashamedly and intentionally lives by a faith-based ethos.

In his keynote address to a conference on education hosted by the Irish Catholic newspaper in Dublin on Thursday, the Primate of All Ireland said that for decades, the Catholic schools of Ireland have played an essential role in supporting parents and families in their role as first educators of their children.

“It is reasonable for boards of management of Catholic schools, in establishing their admissions criteria, to be concerned about ensuring that pupils from the local parish or group of parishes, are able to access their Catholic school,” Archbishop Martin said.

In choosing to send their children to a Catholic school, he said parents not only exercise their human and constitutional right to have their children educated in accordance with their religious beliefs, but they are also placing trust that the school community will assist them in accompanying their children on their itinerary of faith.

The Primate of All Ireland added that it was no surprise that Catholic parents, families and parishes defended the importance of their school’s ethos, or ‘characteristic spirit’, against those who lack an understanding of it, or would actively seek to undermine it.

Catholic schools make no apology for valuing the spiritual, religious and moral dimensions of the person – they cannot stand back and allow faith and religion to be side-lined or privatised out of the realm of schools and education, he stressed.

Elsewhere in his address, the Primate of All Ireland emphasised that Catholic schools are not simply ‘schools for Catholics’.

He said the ethos of Catholic schools aims to be inclusive and welcoming; it is respectful of, and engages with, people of all beliefs and ideological backgrounds; it encourages the religious development of all in their own faith.

“I salute the role played by our Catholic schools as inclusive and caring communities throughout Ireland, and in many places leading the way in integrating migrants, pupils from disadvantaged backgrounds, and pupils with special needs,” the archbishop said.

He said Catholic schools must remain alert to inequalities in the country’s educational system where too many young people, particularly the socially disadvantaged and those with greatest educational needs, leave without meaningful qualifications or opportunities, many of them in turn ending up marginalised or forgotten by wider society.

“These are problems to be shared and tackled by all our schools, not just a few,” he said.

In a Catholic school, religion is not an added extra to be fitted in during break time or twilight hours or during registration. Everything that happens in the school community is rooted in the Gospel values of Respect for Life, Love, Solidarity, Truth and Justice; the Catholic school seeks to harmonise faith and culture.

“We should not neglect the contribution that faith schools make to society,” he told delegates attending the Irish Catholic education conference.

He questioned how a state, which appears to recognise the importance of ERB and Ethics – “at the same time appears to want to remove Religious Education from the core curriculum.”

In his concluding remarks, Archbishop Martin said religious instruction or catechesis in a Catholic school will only mature as it is lived out in family and Church community of faith and he acknowledged that “increasing numbers of Catholic children are no longer attending Catholic schools.”