Home > Featured > Catholic schools must not be a source of division 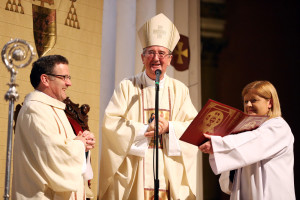 Archbishop Diarmuid Martin of Dublin has urged Christians in Ireland to commit themselves, as the country begins to prosper, to ensure that the needs of those who experience educational disadvantage are not overlooked.

Celebrating Mass on Monday evening at the Church of Our Lady Seat of Wisdom at St Patrick’s Campus DCU to mark the opening of the academic year, the Archbishop said that through visiting parishes and schools, he had come to see the “subtle and at times more obvious ways in which some schools experience disadvantage”.

He said some of this disadvantage is due to external social inequalities and some is due to lack of financial support proportionate to the particular needs of schools.

“A narrow one-size-fits-all financial model can easily become a straitjacket for disadvantaged schools,” he warned.

He also paid tribute to the “extraordinary work” being done by teachers in schools that suffer social disadvantage and to the “great schools working in the face of great odds”.

Acknowledging that there is much debate in Ireland about different forms of patronage and that such a discussion is valid and necessary, Dr Martin said the real divides in Irish education can often be very different.

“As someone who grew up in an area of disadvantage, I have strong feelings about the economic and social divide in which many young people still have to grow up,” he commented.

In the midst of different models of education and expressions of ethos and at times of different ideologies, the Archbishop stressed that there was a need to form new bonds and partnerships to ensure that there is “a common vision and not an antagonistic one of education in our pluralist nation”.

“Such a vision must place children at its centre and especially those children who experience disadvantage. There is need to respect difference, but there are also many common challenges,” he stated.

Elsewhere in his homily, he emphasised that Catholic schools have a “non-renounceable Gospel imperative to be at the service of the poorest”.

He said this was a characteristic of the religious orders that were established to provide education and that it was important that “alongside the failures and abuse that have tarnished their history, that we also pay tribute to the men and women religious who dedicated themselves to the education of the poor, and especially in different times to the equal education of girls”.

According to the Archbishop, who is patron of over 90% of primary schools in the Archdiocese of Dublin, “The best path forward for those of us who wish to foster Catholic education today is to ensure that Catholic schools, in a different future, live up to these original ideals.”

Dr Martin underlined that Catholic education cannot play only lip service to the primary role of parents nor should a Catholic school be “a closed island of believers isolated or, much worse, hostile to the rest of the educational world”.

The Catholic school community, he warned, is not a gated community. “We already have too many of them.”

According to the Archbishop, the Catholic school must enter into relationships with schools of other patronage so that it is not a source of division.

He said all the agents of education in Ireland are called to foster relationships of respect and tolerance and welcome, in such a manner as to build a respectful pluralist model of education for a new pluralist Ireland.