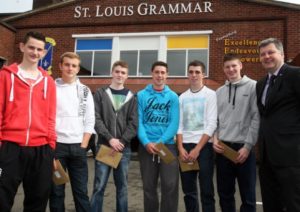 The results were obtained by the Belfast Telegraph newspaper under a freedom of information request.

League table for A-levels sat during the 2014/15 academic year show Catholic schools in the top 11 spots.

The top performing grammar was St Dominic’s High in west Belfast, where 94.9% of pupils received three passes at A-level.

The top non-grammar was St Colm’s High in Draperstown, where 88.1% achieved the top grades.

These results have prompted the principal of one of the top performing Catholic schools to call for the Department of Education in Northern Ireland to examine what makes these institutions so successful and learn lessons from them.

Sean Rafferty, head of St Louis Grammar in Ballymena in County Antrim, told the paper “If you take a look at the top 11 schools they are all faith-based, and I think that says it all.”

Mr Rafferty who has been principal of the North Antrim school since 2011 added, “It’s a combination of community support and a buy-in from parents, whole ethos of achievement, we don’t accept second best and all the time strive for excellence.”

“This is something which I think the Department of Education should be looking at, they should be asking what is the magic ingredient which is making all the top performing schools in Northern Ireland Catholic schools.”

He said “While there is a very strong caveat to be made to the results, as some schools put in pupils for three A-levels and some for four, and some stagger entries while others don’t, therefore you are not comparing like for like always, nevertheless there are important lessons to be learned,” he said.

Speaking recently about the league table results outgoing NI Education Minister John O’Dowd said, “This continuing improvement is welcome news. However, it is obvious that there is much more that needs done. I am clear that I want to see not only a growth in standards, but also a closing of the performance gap.”

Mr O’Dowd attributed the improving picture to a number of factors including the department’s ongoing focus “on raising educational outcomes for young people”.

However, despite the success of grammar schools, and particularly Catholic grammar schools, Mr O’Dowd said, “I want to see every child fulfil his or her potential and am committed to driving out the inequities that still exist within our system.”