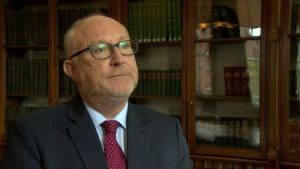 Last week, a Catholic teaching training college in West Belfast welcomed members of the Orange Order to speak to students of Geography and Religion about their culture.

It was a first time that St Mary’s University College on Belfast’s Falls Road took part in such an event.

Two members of the Orange Order gave a presentation about its history to the university seminar.

David Scott and Dr Jonathan Mattison spent over an hour speaking to and taking questions from about 25 staff and students and received a polite and enthusiastic welcome.

Speaking to the BBC, Professor Peter Finn, the college’s principal, said building a relationship with the Order was good for the students.

“St Mary’s is a university institution of higher education in the Catholic tradition, but that doesn’t mean to say we can’t engage,” he said.

“We seek to develop in our student teachers attitudes and values which are positive to other people.”

“We have put in place a project enabling our geography students to learn more about the Order, the traditions of that culture and to enable them to see another perspective.”

Some students who attended Wednesday’s seminar had recently visited the Museum of Orange Heritage in east Belfast.

Mr Scott and Dr Mattison spoke about the Order’s traditions, its past and its outreach work. They answered questions from the audience, and some of the exchanges were frank.

Qualifications for membership of the Orange Order state that prospective member “should strenuously oppose the fatal errors and doctrines of the Church of Rome, and scrupulously avoid countenancing (by his presence or otherwise) any act or ceremony of popish worship.”

However, Orangemen are also told to refrain “from all uncharitable words, actions, or sentiments” towards Roman Catholics.

Mr Scott said the Order was a pro-Protestant rather than an anti-Catholic organisation.

“That doesn’t prevent us from building relationships with our neighbours,” he said.

“And it’s critical that we do that. We find exercises like this very, very valuable, and if we can make a single step of this change through this process we want to do it.”

“We’re not going to change the mindset of everybody, we’ll never do that. This is a very powerful relationship we have with St Mary’s, but we’ve found that the engagement with the maintained schools sector has been very, very successful.”

While the relationship between the university and the Order is in its relatively early stages, representatives of the two institutions say they are committed to developing it further.