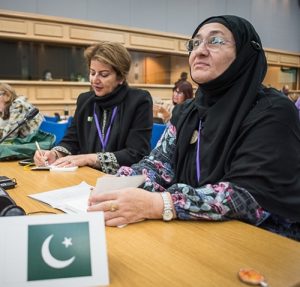 Hundreds of women parliamentarians gathered in Dublin Castle earlier this week for the inaugural International Congress of Women’s Caucuses.

The gathering took place on 9–10 September 2018 in Dublin Castle and brought together parliamentarians from across the globe to discuss issues facing women and how parliamentarians can work to address them.

The parliamentarians came from more than 40 countries, including Argentina, Malawi, Mongolia, New Zealand, Pakistan and the United States.

The congress began with a gala dinner hosted by President Michael D. Higgins, and Taoiseach Leo Varadkar formally opened the conference. President Higgins remarked that it was fitting that the congress coincides with the 100-year anniversary of women achieving the right to vote in Ireland.

The caucus was organised by the Irish Women’s Parliamentary Caucus. The caucus, chaired by Green Party TD Catherine Martin, is a parliamentary group with female members from across all political parties, and its aim is to advance women’s issues.

Among the delegates were four women from Pakistan and Myanmar, including parliamentarians and civil society activists, who attended the congress with support from Trócaire.

In both of these countries, gender inequality is a significant challenge, and traditional norms prevent most women from becoming leaders. One delegate, Shaista Pervaiz, a parliamentarian from Pakistan, has been secretary of the Women’s Parliamentary Caucus for the last four years. There a gender quota was in place in the 2018 general elections, under which every party had to provide at least 5 per cent women candidates. This resulted in nearly 20 per cent of those elected being women.

Ms Pervaiz said she saw this progress as a result of pressure generated by the Women’s Caucus. She is also proud of other successes influenced by the caucus, such as the outlawing of “honour” killings in 2016, and stronger sentences on rape cases.

“I believe that we should all work together. When we are together our voices can be heard,” she said, expressing her belief that one of the reasons the Women’s Caucus was effective in Pakistan was because it overcame party politics.

Another parliamentarian from Pakistan, Nafeesa Inyatullah Khattak, said she hoped the Women’s Caucus can advance the empowerment of divorcees and widows in Pakistan.

Both women said the congress had been a valuable experience for them.

“The congress has given me more strength, and I feel I can face more challenges,” said Ms Pervaiz.

The congress concluded with the Dublin Castle Declaration. This declaration calls for the establishment of a women’s caucus in every parliament by 2020.