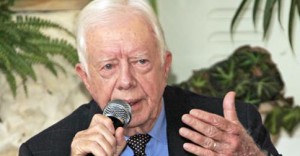 Former US president, Jimmy Carter, who is a member of The Elders, has lent his backing to the campaign to criminalise the buyers of sex in Ireland.

In a letter to TDs and Senators, the former head of state urged Irish legislators to press on with legislation that targets pimps and those buying sex while protecting prostituted women and girls.

In his letter, Mr Carter refers to the Irish Government’s 12-month delay in introducing this legislation and he urges TDs and Senators to expedite it sooner rather than later.

“I hope that you will lead your nation towards the protection of prostituted women and girls with a sense of urgency,” he states.

Mr Carter describes the Justice Committee’s proposals as a “transformative approach to ending the exploitation, abuse, and trafficking of women and girls.”

In his concluding paragraph, Jimmy Carter warns that “Prostitution is inherently violent towards women and girls” and says he supports efforts to help those who are trapped in this industry.

Denise Charlton, CEO of the Immigrant Council of Ireland, is reported to have briefed Jimmy Carter before he sent his letter, which is dated 27 August 2014.

The Immigrant Council of Ireland has been campaigning for the introduction of a national action plan to protect victims of trafficking and ensure severe jail sentences for the criminals behind it.

A law, Act against human trafficking, which was introduced in 2008 can impose life sentences for trafficking, but critics warn that it is not being used.

Jimmy Carter, who was a Democratic president from 1976-1980, is an active campaigner on human rights and public health throughout the world, through the Carter Centre he set up in 1982.