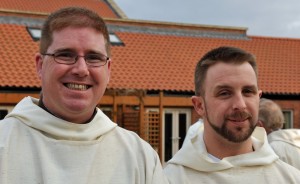 Fr Gerard (Ged) Walsh was ordained by Rt Rev Terence Drainey, Bishop of Middlesbrough, at Our Lady’s Church in Acomb, during the parish celebration of Mass.

This was an historic moment for the Carmelite Order which first came to York in 1250.

Until the suppression of Catholic religious orders at the Reformation in 1536, York was the administrative and training centre for the Carmelite Order of mendicant friars in northern England.

The friars returned to the city in 1995 and today have pastoral care for chaplaincies at the University of York and York Hospital, as well as Our Lady’s parish since the start of this year.

In addition to friars, York is home to communities of Carmelite enclosed nuns, active sisters, and lay people, all of whom took part in the liturgy, alongside clergy of Middlesbrough Diocese.

Fr Ged is Catholic Chaplain at the University of York, and his ordination was attended by many past and present students and staff, as well as his ecumenical colleagues.

The 37-year-old is originally from The Wirral, and his family and friends were among the large congregation.

Prior to entering the Carmelite Order, Ged was a radiographer in Liverpool, but gave up this promising career when he felt called by God to enter the religious life.

He studied for the priesthood in Dublin, and representatives of the Carmelite friars from Ireland and across Britain were present.

Fr Ged’s ordination is the second to take place in Britain within the last few months.

The Prior Provincial of the Carmelites, Fr Antony Lester, O.Carm, said: “At a time when vocations to priesthood and the religious life seem to be in decline in Europe, we Carmelites in Britain are very fortunate that God is sending us young men who are dedicating themselves to God’s service as friars.”

“Ged will be a very fine priest, because he has a caring heart and good pastoral experience.”

The ordination was attended by two young men who recently entered the Carmelite community as part of a new pre-novitiate programme.

The British Province of Carmelites has some 25 communities of friars, sisters and lay people spread across England, Scotland and Wales.

The Carmelites are one of the most ancient religious orders of the Roman Catholic Church, first arriving in Britain in 1242.

The Order is engaged in many different forms of ministry, including work in parishes, retreat centres, prisons, ecumenical and interfaith projects, justice and peace promotion, publishing, counselling, teaching, and spiritual direction.