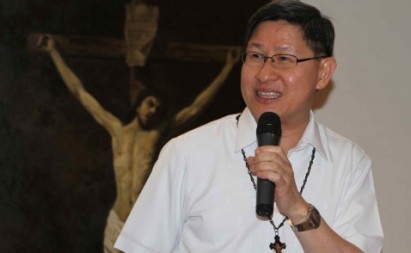 The Columban missionaries in the Philippines had three reasons to celebrate over the past week.

Cardinal Luis Antonio Tagle, Archbishop of Manila, visited them and thanked them for their work; Fr Shay Cullen’s Preda Foundation celebrated its 40th anniversary; and there was also St Patrick’s day!

Cardinal Tagle gave the sermon at a special Mass in the Columbans’ Manila house where the international Columban leadership gathered on 14 March.

“Thanks for the Columban missionaries who have allowed themselves to be vessels of God’s love” he is quoted as saying by ICN. “You have touched hearts here and elsewhere and conveyed the mystery of God’s love”.

He said that the Columbans were involved with his own faith formation, helping him and others understand “what Christian leadership is all about”.

The Mass was concelebrated by Fr Kevin O’Neill, the Australian superior general of the Columbans, who is based in Hong Kong, and Fr Patrick O’Donoghue, the Irish director of the Columbans in the Philippines.

The order’s headquarters were moved to Hong Kong before Fr O’Neill became superior general – a major development for the Society deemed necessary because most of the new members are now coming from the Pacific Rim countries such as Korea, Philippines, Fiji, Chile and Peru.

The Columbans have been in the Philippines since 1929 and over that period, eight members have been martyred.

The visit of Cardinal Tagle coincided with the international meeting which reaffirmed commitment of Columban priests to work in partnership with Columban lay missionaries and lay co-workers, and to work on justice, peace and the integrity of creation, alongside inter-religious dialogue.

Just days earlier in a special message published on 11 March for the 40th Anniversary of Preda Foundation Fr Shay Cullen stated, “Forty years of non-stop service to the people of the Philippines and beyond, helping the vulnerable exploited women and children, is no little accomplishment.”

“We have had many struggles, challenges and difficulties to overcome and with the power of Eternal Goodness found in the dedicated social workers of Preda Foundation and in you, our friends and defenders of children and human rights, we have succeeded.”

He said that with its partners Preda continue to expand to help more women and children and the survivors of typhoon Haiyan (Yolanda).

“We are grateful to all of you and the people in the human rights and fair trade movement for the solidarity and sharing that makes this work possible. From all of us at Preda Foundation, our heartfelt thanks,” he wrote.

Fr Shay Cullen is well known for his newspaper columns about his work with Preda in the Philippines. The name Preda stands for: People’s Recovery Empowerment Development Assistance Foundation.

Preda’s best known mission is to win freedom and new life for children in jails, in brothels, in hunger, on the street and those mired in poverty.

It also helps battered women, indigenous people and to protect the environment and alleviate poverty by micro-credit and fair trade.