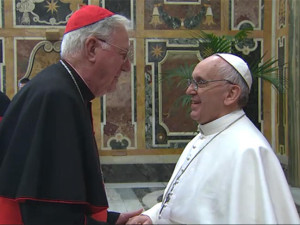 Cardinal Cormac Murphy O’Connor, the Archbishop Emeritus of Westminster and former President of the Catholic Bishops’ Conference of England and Wales, will speak on the Year of Mercy in Cork later this month.

The 83-year-old, who has close connections with Cork, will give his address on the theme ‘Pope Francis and the Gospel of Mercy’ in Christ the King Church, Turners Cross, Cork city on Sunday 21 February at 3pm.

Bishop John Buckley of Cork and Ross is due to launch the Year of Mercy Pilgrimage in Cork City at this gathering.

It is an initiative of the Diocese of Cork & Ross Pastoral Development Office which has also organised a series of talks on mercy in partnership with Trócaire exploring the following themes:

In his Bull announcing the Jubilee Year of Mercy, the Pope said the Missionaries of Mercy “would be a sign of the Church’s maternal solicitude for the People of God, enabling them to enter the profound richness of this mystery so fundamental to the faith.”

Priests chosen to be Missionaries of Mercy have also been given the authority to pardon “even those sins reserved to the Holy See.”

Above all, the Pope said, they will be “living signs of the Father’s readiness to welcome those in search of his pardon.”

In his homily, Pope Francis said the day’s readings present two invitations: First, to be reconciled to God.

In order to do so, he said, we must first recognise that we are in need of mercy: “This is the first step in the Christian journey; it comes in through the open door that is Christ, where He Himself awaits us, the Saviour, and He offers us a new and joyful life.”

The Pope noted a number of obstacles that “close the doors of our hearts” and make reconciliation with God difficult.

The Missionaries of Mercy, he said, have a mandate “to be signs and instruments of the forgiveness of God,” called to help their brothers and sisters to “open the doors of their heart, overcome shame, and not flee from the light.”

The second invitation, the Pope said, is heard in the reading from the prophet Joel. God says to His people, “Return to me with your whole heart.”

Sin keeps us far from God, but Jesus has offered a “story of salvation” that enables us return to Him. The Gospel for the beginning of Lent, he says, offers us three remedies for sin: prayer, charity, and fasting.

But these three remedies are not merely external acts, the Pope said. Rather, they must come “from the depths of our very being.”

During Lent, Christ calls us to live out our acts of prayer, charity, and penance “with coherence and authenticity, overcoming hypocrisy.”

Pope Francis concluded, “Let us set out on this journey together, as a Church, receiving the ashes and keeping our gaze fixed on the Crucified One. Loving us, He invites us to be reconciled with God, and to return to Him, in order to rediscover ourselves.”