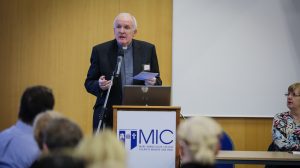 Bishop Brendan Leahy has paid tribute to the work done in the area of safeguarding children and vulnerable adults in the Diocese of Limerick, but he warned that there can be no let-up in vigilance in the implementation of safeguarding measures.

Speaking at a safeguarding conference, ‘Building Collaboration in Safeguarding’, involving 100 representatives of organisations across Limerick in Mary Immaculate College, Dr Leahy said safeguarding is not just about children, but people of all ages and abilities who are vulnerable to predators.

“We are, in Limerick Diocese, in a stronger place than we were. We have a range of services in place and very active training programmes. The greatest danger for us is that we might relax and believe that the worst is in some way behind us. To take this view would be a profound error which would compound the historical failures.”

He warned that sometimes “it seems as if all of us, all of society, can want to simplify this issue and move on. To stay with an awareness of the pervasiveness of abuse and those dark parts of our human nature and the tendency to exploit weakness and vulnerability, may be almost too much.”

However, the Bishop of Limerick said that from his own meetings with abuse victims, he was critically aware of the impact of abuse on them and their families.

“This can impact on all dimensions of their lives and there are no quick or simple solutions to what are sometimes lifelong struggles. I am also very conscious of the strain on people working in voluntary organisations as they struggle with what at times seem to be enormous limitations on resources.”

Noting how in recent weeks millions have joined the social media conversation using the hashtag #MeToo or its equivalent on Twitter, Facebook and Instagram – women and men denouncing harmful sexual experiences – Dr Leahy said many are revealing for the first time, via social media, their own stories.

While the majority of those sharing #MeToo stories are adult women, a large number of the shared stories reveal sexual abuse that began when they were still minors.

He then explained how “People of my generation began our adult lives with almost no awareness of the pervasiveness and impact of abuse in our society and in all societies. As a consequence, failure to recognise and respond appropriately to the complex issues which abuse presents has, at times, compounded the profound and harmful impact on the lives of many young and vulnerable persons.

“At one point in trying to tackle the issues, we began speaking about child protection. Today we speak instead of safeguarding because safeguarding is a concept that reaches beyond protection, responding not only to problems which have occurred but incorporates the prevention of harm and the promotion of welfare. Safeguarding also extends beyond children to include people of all ages and abilities who may have vulnerabilities which expose them to a risk of abuse.”

The conference was organised by the Diocese of Limerick in association with An Garda Síochána, Tusla and the HSE.

Attendees included those from statutory, voluntary and educational sectors, as well as various faith organisations.

The Bishop said the focus of the conference was about informing and allowing attendees to reflect on statutory perspectives. “It is my hope that today’s conference in this community is just a beginning moment and that we may have many such moments in the future.”

He expressed the hope that the conference would trigger ideas and initiatives which would feed into the teaching education programmes in Mary Immaculate College to the benefit of future generations of teachers.

The conference was also addressed by Chief Superintendent David Sheahan, who spoke about the level of interagency collaboration that is taking place, quoting extracts from the NBSCCCI (National Board for Safeguarding Children in the Catholic Church in Ireland) audit of Limerick Diocese that acknowledged the unique engagement between Limerick Diocese, an Garda Síochána and HSE/Tusla.

They outlined recent developments in the Protective Services Unit at Henry Street Garda Station and the Vulnerable Persons Service within the HSE.

Tusla also outlined the newly implemented provisions of the ‘Children First’ legislation and the issue of mandatory reporting.

Bernard Gloster, Chief Officer of the HSE, chaired an open forum which looked at ways in which agencies in Limerick might work together in building greater collaboration in safeguarding children and vulnerable people.