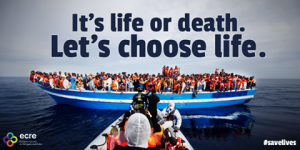 Pope Francis has appealed to the international community to take swift and decisive action to avoid more tragedies following news of the sinking of yet another boat carrying migrants in the Mediterranean Sea.

It is feared 700 people may be dead and at the time of publishing between 25 and 50 had been rescued.

“They are men and women like us, our brothers seeking a better life, starving, persecuted, wounded, exploited, victims of war. They were looking for a better life,” said the Pope on Sunday morning after the Regina Coeli prayer in St Peter’s Square.

Pope Francis expressed his “most heartfelt pain” and promised to remember the victims and their families in prayer.

“I make a heartfelt appeal to the international community to react decisively and quickly to see to it that such tragedies are not repeated,” he said, before asking the crowd to pray “for these brothers and sisters”.

This most recent tragedy happened when a boat carrying migrants capsized off the Libyan coast south of the Italian island of Lampedusa, a major entry point for migrants from northern Africa.

The tragedy on Saturday night/Sunday morning is being described as one of the worst disasters in the Mediterranean.

Pope Francis had previously joined the Italian government in calling on the European Union to do more to help the country cope with rapidly increasing numbers of migrants fleeing war, persecution or poverty.

Italy is struggling to cope with close to 200,000 migrants who have landed there since the start of 2014.

Many arrive in Sicily and towns in the region are running out of places to shelter them, including the more than 10,000 who arrived last week.

Italy wants to continue rescuing migrants but needs more help from the European Union to shelter and rescue them.

The Immigrant Council of Ireland on Sunday called on Irish ministers to speak out at EU level to end what it called ‘the mass drownings’ in the Mediterranean and demand a response which has a humanitarian focus.

Responding to this latest tragedy, Brian Killoran, Chief Executive of the Immigrant Council of Ireland (ICI) said, “People across Ireland will be stunned at the latest reports from the Mediterranean and the expected loss of life on a huge scale.”

“Our political leaders must use the expected EU crisis meetings of Foreign and Interior Ministers to give voice to that shock – and demand that search and rescue operations halted last year are re-instated.”

He said that the new policy of halting search and rescue has failed as a deterrent and has led to many more deaths.

ICI along with many international human rights groups have warned that the tragedy is man-made and demanded an EU-wide response.

ICI is partnered with many European human rights networks and with them will demand “a humanitarian rather than a fortress” response to this crisis.