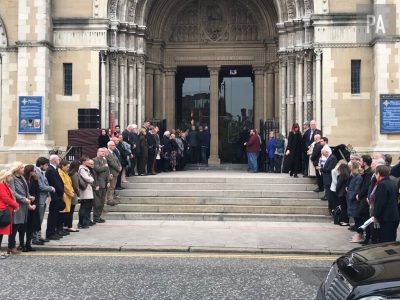 Guard of honour by colleagues at St Anne’s Cathedral

“Why in God’s name does it take the death of a 29-year-old woman with her whole life in front of her to get us to this point? … I dare to hope that Lyra’s murder on Holy Thursday night can be the doorway to a new beginning. I detect a deep desire for this,” Catholic priest Fr Martin Magill has stated.

Loud and prolonged clapping of both agreement and anger followed this part of his address at the funeral of murdered journalist Lyra McKee at St Anne’s Cathedral in Belfast yesterday.

The ecumenical service for the journalist, who was shot dead in Derry, was led by Dean of St Anne’s, Stephen Forde, and by Fr Magill.

It was attended by President Michael D Higgins, Taoiseach Leo Varadkar, British Prime Minister Theresa May, UK Labour leader Jeremy Corbyn, Sinn Féin leader Mary Lou McDonald, and DUP leader Arlene Foster, as well as other community and political leaders, who sat side by side in the cathedral.

Quoting a friend of Lyra, Fr Magill made a plea to the politicians present to work together so that those in deprived areas feel that the peace process is working for them.

“‘They need a life, not a gun put in their hands.’ As politicians, you will be familiar with the first report of the Independent Reporting Commission published last October which examined in depth paramilitary style attacks and found a clear correlation between these attacks and areas of social deprivation. Lyra’s friend is right in pointing out that our young people need jobs, and education and training to get those jobs.”

He added that while politicians have a very difficult job to do, Lyra also had a tough job. “There is another valuable lesson from her life – she was like ‘a dog with a bone’ when she believed she could make a difference,” said Fr Magill. “When it comes to our peace process, I would love to see this dogged attitude to the rebuilding of an Assembly that works for the common good. As I listen to the radio every morning, all I seem to hear about various initiatives in Northern Ireland are these words, ‘without a minister, this can’t be taken forward’.”

Fr Magill, PP, St John’s Parish, Falls Road, Belfast, prayed that “Lyra’s murder may be the catalyst needed for parties to start talking, to reform that which was corrosive in previous Assemblies and to begin anew.”

Commending those that have come forward so far with information about the murder, Fr Magill appealed to others with information to come forward and said that if people wanted to see a new society built on justice and fairness, on hope and not fear, they could help build that society by telling the police what they know.

Fr Magill called on those who had any part in the murder to reflect on Lyra McKee, journalist and writer, as a powerful example of “The pen is mightier than the sword” and pleaded with them to take the road of non violence to achieve political ends. “To those still intent on violence, I ask you to listen to the majority of the people on your beloved island of Ireland who are calling on you to stop,” he said.

On the eve of the funeral, the family of Lyra McKee released a statement stating that she had a “gentle innocent soul” and urging people to follow her philosophy to combat hate with “love, understanding and kindness”. 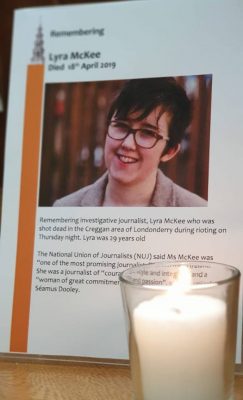 In the statement her family said that she believed passionately in inclusivity, justice and truth. “Lyra spoke to and made friends with anybody and everybody, no matter what their background, those of all political views and those with none. This openness, and her desire to bring people together, made her totally apolitical,” the family stated. While many might feel sad or angry at the tragic death, they should follow her example: “Lyra’s answer would have been simple, the only way to overcome hatred and intolerance is with love, understanding and kindness.”

Lyra McKee was born on 31 March 1990 and attended Holy Family Primary School. Once she heard The Twits by Roald Dahl and then read Harry Potter books there was no stopping her reading. She was later to engage with JK Rowling on social media.

In her teens her interest in journalism began with the St Gemma’s school newspaper and The Headliners charity, which gives young people a voice by using journalism and media as a tool for learning and campaigning. She was awarded the Sky News Young Journalist Award 2006. She studied online journalism at Birmingham City University, graduating with an MA degree.

In 2016, aged just 25, she was named as an exceptional achiever with an exciting future as an investigative reporter by Forbes magazine in its 30 under 30 list. Last month the Irish Times included her in the 10 rising stars of Irish writing. Her TEDx talk, “How uncomfortable conversations can save lives”, highlighted the 2016 Orlando nightclub shooting. Her book on the murder of Rev Robert Bradford, the Member of Parliament for South Belfast, called Angels with Blue Faces, was due to be published later this year.