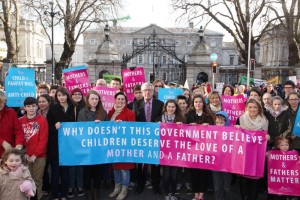 As the Children and Family Relationships Bill works its way through the Committee Stage in the Dáil, a family advocacy group has appealed for substantial amendments to the bill.

‘Mother and Fathers Matter’ has several objections to it.

Mothers and Fathers Matter believes that the only way to prevent undermining the rights of children inherent in ‘Donor Assisted Human Reproduction’ is to prohibit the practice entirely.

They argue that this will not affect the “vast majority” of people who use IVF in Ireland, because most couples use their own eggs and sperm, so “the natural ties are preserved and the children are raised by a mother and a father.”

“We believe that in its present form the Children and Family Relationships Bill undermines the rights of children despite Government and opposition protestations that the entire Bill is in the ‘best interests’ of children,” said Dr Thomas Finegan.

He said they also believed that the provisions of the bill dealing with adoption “must retain the preference for placing a child with a married mother and father.”

“Cohabiting couples break up more. On that basis, a child being brought up in a married family has a greater chance of staying connected with his or her father and mother and it is more stable for that child.”