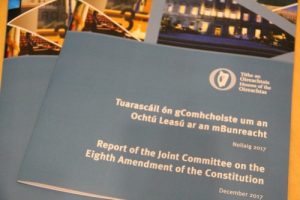 For the first time on Wednesday, members of the Fine Gael led government had an opportunity to discuss the report of the Oireachtas Committee on the Eighth Amendment which was published in December 2017.  The document recommends repealing the Eighth Amendment (protecting the right to life of the unborn and equal right to life of the mother) and introducing legislation to allow for abortion in the first trimester without restriction.

Briefing the press afterwards, Taoiseach Leo Varadkar said there was “a concern among many politicians” that the 12 week limit for unrestricted abortion may have gone too far “for the majority of the public”. “It (the proposal) went further than many people may have anticipated, it certainly went further than I would have anticipated a year or two ago,” he said. “But also after reading the report, I can understand the logic behind that and why they came to that decision, particularly given the widespread availability now of the abortion pill.”

Mr Varadkar said Fine Gael politicians and ministers would be allowed to “campaign freely, in accordance with their conscience, or not campaign at all”.

The 25th May has been touted as the ideal date for the referendum with political correspondents commenting that the government wants it out of the way before a possible Papal visit in August.

Kevin Doyle, Group Political Editor of Independent News and Media told Today with Sean O’Rourke yesterday, that the Taoiseach had given the cabinet three options – to do nothing, to work on the basis of the Committee’s recommendations (unrestricted abortion in first trimester), or to come up with other potential legislation for abortion that would follow the referendum. “But in the timeline [aiming for a  25th May referendum] they can’t come up with new proposals,” said Mr Doyle.

On Monday (15th January) the Fine Gael Parliamentary Party will meet to discuss the referendum, and this will be followed by a parliamentary debate in the Dáil and Seanad. “Whether they say they want more abortion or less abortion, the reality is, if they ask people to repeal the Eighth Amendment, they are writing themselves a blank cheque as they will bring in increased abortion in the future if they want anyway,” commented Senator Ronán Mullen on RTÉ news.

Cora Sherlock from the Pro Life Campaign said it was very clear that “some members of the government are determined to keep the time frame as tight as possible, to deny the public an opportunity to scrutinise closely the proposal that will be put to the people”.

She said it was not good enough that the government was taking the recommendations of the Oireachtas committee so seriously when “the Committee itself ignored all that’s positive about the Eighth Amendment, and never once heard from families who say their children are alive today because of the Eighth Amendment.”

The abortion debate is something that is going to unfold over the next couple of months, she told CatholicIreland. “People are going to reflect on their own lives and talk about it themselves. We need in Ireland the situation where people have those conversations among their family and among their friends.”

Ms Sherlock said travelling around the country, she heard “the most amazing stories” and people were “just waiting for the opportunity to bring them to a wider audience”. Both the Citizens’ Assembly and the Oireachtas Committee on Abortion would have been ideal occasions to do this but these people were “completely ignored”.