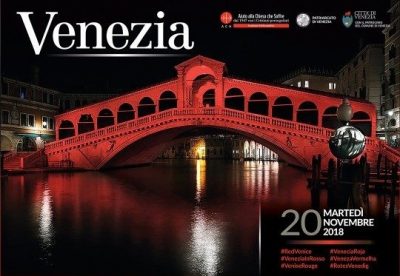 The annual lighting up of famous landmarks in red to symbolise the blood of persecuted Christians got under way in the Italian city of Venice last night when the Rialto Bridge and waters of the Grand Canal were bathed in crimson.

The #RedVenice initiative, which was launched on 20 November, has the backing of Pope Francis. It is part of a campaign spearheaded by Aid to the Church in Need (ACN) to draw attention the martyrdom and persecution of Christians.

The Vatican’s Secretary of State, Cardinal Pietro Parolin, sent a message on behalf of Pope Francis to Patriarch Francesco Moraglia of Venice expressing his support for Tuesday evening’s event.

It was sponsored by the Patriarchate of Venice and the city’s municipality as well as ACN, a charity helping persecuted Christians worldwide.

The message said the Pontiff sent his “affectionate greetings” to those seeking to sensitise public opinion about “the drama of numerous Christians persecuted for their faith”.

According to Cardinal Parolin, the Pope hopes the initiative will “arouse due attention on the part of all to the serious problem of discrimination that Christians suffer in many parts of the world”.

The message noted there are many countries where a single religion is imposed or where there is violent persecution or systematic cultural mockery of the disciples of Jesus, denying them religious freedom, which, the Pope said, is a fundamental human right that must be recognised because it reflects man’s highest dignity.

Cardinal Parolin said the Pope encouraged people to pray so that Christians who find themselves in difficult conditions can prove themselves strong in the face of trials, feeling the closeness of the entire Catholic community.

The Pope also encouraged all participants in the #RedVenice initiative “to be builders of reconciliation and peace everywhere”.

Rome’s most famous landmark, the Colosseum, was lit up in red on 24 February last in a similar gesture of solidarity with all those who are persecuted for their faith.

The #RedVenice event is focusing attention on women who suffer for their faith, especially Asia Bibi, the Pakistani Catholic woman who spent eight years on death row and was acquitted of blasphemy by the country’s Supreme Court on 31 October. However, her fate still remains unclear.

Last Friday, at an audience with the Order of the Holy Sepulchre of Jerusalem, Pope Francis accused the world of “looking the other way” where the persecution of Christians is concerned. He said Christians “are being killed in ever increasing numbers”.

The Pontiff also called for dialogue and respect to try and achieve peace in the Middle East.

Red is the Christian colour of martyrdom. Christians are the most persecuted faith group in today’s world and #RedWednesday will honour all Christians who suffer and die for their faithfulness to Christ’s message of peace and love.

The aim of #RedWednesday is to shine a light on Christian persecution and to highlight the injustices perpetrated against faith groups.

Simply because of their religious beliefs, people in many parts of the world suffer:

ACN’s campaign calls for respect and tolerance for people of faith and between different faith traditions.