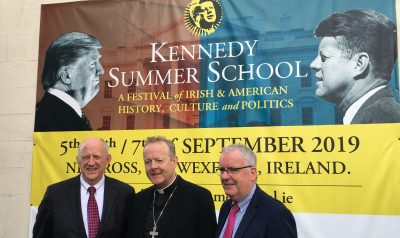 On Thursday evening he spoke on the subject, “What role is there for faith in our politics?”

Faith is what makes us want to cry out about the extent of problems like homelessness, poverty, violence, criminality and corruption on the streets of Ireland, said the Archbishop. It is what moves us to weep when so many young people resort to self-harm, and it is what confronts us to examine our own lives and attitudes.

“Bringing faith to politics is not an optional extra for a committed Christian,” said Archbishop Martin. “Faith is no mere private affair. It entails a social duty to help protect the future of humanity.”

Looking at the role of the church in an increasingly secular world, he identified different types of secularism. On the one hand. there is “programmatic secularism”, a term used by the Archbishop of Canterbury, Rowan Williams, to describe an exclusive public orthodoxy where “any public manifestation of religious allegiance is to be ironed out so that everyone may share a clear public loyalty to the State, unclouded by private convictions”.

On the other hand, there is “healthy secularism” which admits a distinction between Church and State. This allows the space for “Christians to intervene in public debate and to make their arguments as brothers, sisters and friends alongside those of all faiths and none”.

The Primate of All Ireland pointed out that the promotion of fundamental values was not a confessional activity per se.

“These values are defended by the Church precisely because they are human even before they are Christian; they are rooted in the natural law and accessible to reason,” the Archbishop said. “They are views that can be shared by all people of good will.

“President Kennedy, in his inaugural address, identified as a defining issue the belief that the rights of man come not from the generosity of the state but from the hand of God. He was undoubtedly recognising that the dignity of man is rooted in his creation in the image and likeness of God. Such rights therefore have their basis in the natural and divine law.

“This is the crux of the Church’s concern today – that the State does not promote an erroneous understanding of the human person through, for example, introducing laws that permit the destruction of innocent human life.”

The Archbishop said: “The State will flourish if it is able to sustain itself as a ‘community of communities’; it will struggle if communities, like faith communities, who wish to play a full role in public life while exercising freely their spiritual, cultural, educational and charitable activities, find themselves unwelcome, forced to remove all their religious and cultural symbols from public spaces, or even made to retreat from public discourse altogether.

“The marginalisation of faith communities from public life, especially here in Ireland where the Christian faith is so deeply embedded in our culture, language, landscape and identity, would surely not bode well for the future of our country, our sense of who we are, where we have come from, and who we want to become in the years and decades ahead.”

The Kennedy Summer School is a festival of Irish and American history, culture and politics. The festival finishes today with a history symposium, the keynote event, a panel discussion on Irish politics and another panel on the 2020 elections in the United States.