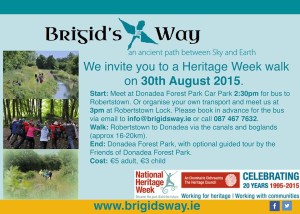 Brigid’s Way organisers says they are delighted to have been invited to join National Heritage Week next Sunday (30 August).

The 20km walk incorporates a stage of the ancient path associated with Ireland’s inspirational female saint.

Earlier in the year, Brigid’s Way was named as one of Ireland’s National Pilgrim Paths.

“We will walk one of the nine stages of Brigid’s Way but in reverse,” Karen Ward told CatholicIreland.net.

She described it as an ‘alignment’ of ancient and sacred sites from Faughart to the Saint’s monastic city in Kildare.

It was discovered by Anthony Murphy and Richard Moore during research for their book Island of the Setting Sun: In Search of Ireland’s Ancient Astronomers.

The route intersects the Cygnus (Swan) constellation which was prominent in the skies at the time of Brigid’s birth in the 5th Century AD. 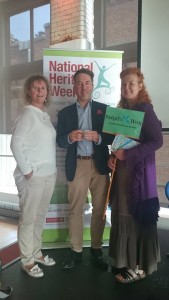 Karen Ward, who featured in RTE’s Health Squad, has learned that the route follows the direction that Brigid took to be buried in Downpatrick.

“Brigid means many things to many people, she was a very special woman. We are amazed at the emails and letters we get from around the world from people who admire her. They see her as a Goddess and a Saint, as an archtypical strong woman – of peace, justice, and industry as her Abbey in Kildare was very productive and well run.”

So Karen Ward hopes that on Sunday many will be keen to walk in Brigid’s footsteps on what is an ancient section of Brigid’s trail between Robertstown and Donadea Forest Park in Kildare.

The walk involves some off road sections and runs along the canals, boglands and the forest.

It includes a 9/11 memorial and at Donadea Forest Park guided tours are available.

Brigid’s Way started in 2013 by Dolores Whelan and Karen Ward and with the backing of the Brigidine Sisters in Kildare, and the support of many groups and individuals along the route. 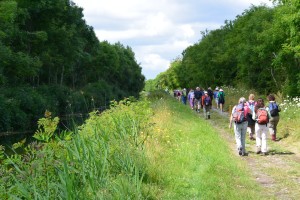 This Summer, the 2015 pilgrimage from Faughart to Kildare involved almost 100 pilgrims who came from America, Mexico, UK, Northern Ireland and from all over Ireland.

There was a core group of 15 people who completed the full nine days and others joined in for five or six days.

Many also joined for just a single day and one section of the route, and Karen Ward was particularly happy to see so many joining in this way as the pilgrims moved towards Kildare.

This year for the first time pilgrims were able to ‘sleep under the stars’ in Donadea Forest Park. 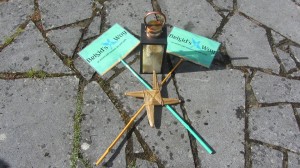 Karen Ward highlighted how the Way links people with a variety of convictions and beliefs from the Friends of Brigid in Faughart and the parish who saw them off, to a Shaman at the Hill of Slane (with its ruins associated with St Patrick) to a Druid at Tara and the Brigidine Sisters at their Solas Bhride centre in Kildare.

For the Brigid´s Way Along the Canal on Sunday cars can be left at Donadea Forest car park, and from there at 2.30pm a bus will take walkers to Robertstown Lock to start the walk at 3pm.