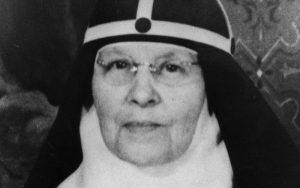 A Bridgettine Day to mark the canonisation of Mother Elisabeth Hessleblad, organised by the Association of Catholic Women, will take place on Monday 12 September at the Bridgettine Guest House in Iver Buckinghamshire in the UK.

St Maria Elizabeth Hesselblad (4 June 1870 – 24 April 1957) was a Swedish nurse who was a convert to Roman Catholicism who founded the Bridgettine Sisters.

She is only the second Swede to receive sainthood, following St Bridget 625 years ago.

Hesselblad is also recognised as a Righteous Among the Nations due to her efforts in World War II saving the lives of Jewish people during the genocide of the Holocaust.

She reportedly saved more than 60 Jews during World War II, hiding families inside her convent in Rome for about six months before the war ended.

She headed to the United States in her teens in search of better economic opportunities.

She landed in New York and became a nurse. She converted to Catholicism in 1902 and left for Rome two years later.

In Rome, she settled with the Carmelites, where she took the habit of the Bridgetines, an order founded in the 14th century by Saint Bridget, who was canonised in 1391.

Hesselblad restored the order in Rome in 1911 and brought it back to Sweden a decade later, as part of her effort to unite all Christians and breathe new life into an order and a religion that had been languishing after the Reformation.

She is credited with promoting peace between Catholics and non-Catholics, and for pushing other Christians and non-Christians alike toward the Catholic Church.

Pope John Paul II beatified her on 9 April 2000 and Pope Francis approved her canonisation in late 2015; the canonisation date was determined on 15 March 2016 and was celebrated on 5 June 2016 in St Peter’s Square.

Pope Francis is due to visit Sweden — a country with just 150,000 Catholics — from October 31 to November 1 to mark the 500th anniversary of the Lutheran Reformation, which will be celebrated in 2017.