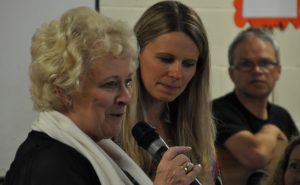 Answering questions from young people on the theme of Mercy in Politics, Baroness Nuala O’Loan said she thought there had been”a very significant absence of mercy in politics”.  For politicians who want to live justly and love tenderly, politics can be a “profoundly difficult place” she told a packed hall at Focolare’s summer gathering at Dungarvan, Co. Waterford on 9th July.

Brexit was in part about the UK’s “membership of the EU and a faceless bureaucracy” and in part about the problems of immigrants coming into a society, elements of which were “very marginalised and getting poorer”.

But above all, said the former Northern Ireland Police Ombutsman,  they said ‘We’ve had enough.’

“And democracy actually works because although I was a Remainer not a Leaver, what I see is a reality call to those in power that says ‘You have been doing it wrong for so many years and now change your ways’.”

Baroness O’Loan said that she had taken part in a debate in the House post Brexit where 116 members had spoken. “What I heard there was the reality check really kicking home and people saying ‘We do have to change the way we do government. We have to think very seriously. We don’t want to leave but we can’t have a second referendum. The people have spoken and we have to do what the people want’.” 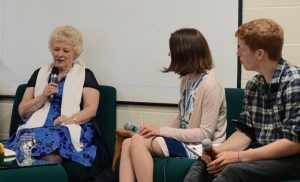 People of her own generation grew up with more security – grants for university, pensions, jobs that lasted and the capacity, if one worked hard, to get ahead.  “Our younger generation have zero hour contracts, no pensions, no job security, houses are very difficult [to buy] so somehow in our priorities as politicians and as governments across the world we have failed the people,” she said while expressing the hope that politicians (from parties) would be able to set aside their differences and come together to work for the common good.

Asked about the refugee crisis and the Pope’s action of bringing some Syrian refugees to the Vatican, Baroness O’Loan said it was like building the peace in Northern Ireland “It is through small actions together that we build mighty movements and I guess that is what Focolare is above all.”

We have to care for the immediate refugees, she said, and stop the people smugglers.  “And somehow as a society we’ve got to look back and see how did we get to this place? Learn from our history. We exploited, we grabbed, we took  from all these countries from which the refugees are now coming. As a rich capitalist world we took their minerals, diamonds,  gold and their produce.  So what we have to do is build them up again so that people don’t have to leave their homeland.”

Baroness O’Loan said that in spite of the trauma, grief and tragedy that she has witnessed through her life and work, she was hopeful.  “Martin Luther wrote that the Lord has shown the promise of the resurrection in every leaf in springtime and we do constantly see this resurgence of love and love will conquer evil. We all just have to work at it and we have not to be lazy.”