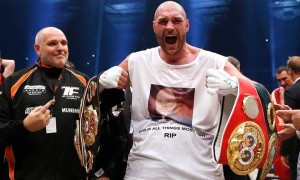 The new WBA, IBF and WBO World Heavyweight boxing champion has spoken about his faith to the Catholic Herald and praised God for his victory on Saturday night.

“God gave me the victory tonight,” he said after the fight.

He also wore a t-shirt with the slogan: “God is all things most high”.

Tyson Fury, who beat Ukrainian Wladimir Klitschko with a unanimous points victory, is proud of his Irish and Traveller heritage and has spoken freely about his faith.

His paternal grandfather was from Tuam, Co Galway, which is also the birthplace of his father John Fury. His maternal grandmother is from Co Tipperary and his mother was born in Belfast.

He was born and raised in Manchester.

He initially had a lavish and partying lifestyle but since turning to God he has become a clean living family man with a modest home.

The boxer married his teenage sweetheart Paris and they have a six-year-old daughter called Venezuela, a four-year-old son Prince, and they are expecting another baby.

In 2011, when he was British and Commonwealth Heavyweight champion and a rising star in the boxing world, he gave a long interview to the UK’s Catholic Herald about his faith.

In it he stated that the prize he wants most is “going to heaven” and that “being right with God” is the most important thing in life.

On the question of how his faith affects boxing in which he hurts people he said that God gives talents and he is using his to the best of his ability, and boxing is just a sport.

While his mother is a Protestant and his father is a Catholic, neither is practicing.

His uncle, a born-again Christian and preacher, introduced him to religion. While he speaks in a very evangelical way he was particularly drawn to Catholicism, and told the Catholic Herald that he has much to learn about this faith which he chosen to follow.

He said that he goes to church every Sunday and reads the Bible, both of which give him strength to know that “if God is in my corner then no one can beat me.”

He has been criticised for his Christian faith and in particular his statements on homosexuality and abortion.

Back in the 2011 interview he said that he would not be ashamed of God but rather by putting Him first “everything will work out.”

The interview concluded with Tyson Fury convinced that becoming the world champion was his destiny.

He returned to that subject speaking after his win on Saturday night when he said, “Everything is destined to be in life, every turn we take is planned.”

“From the first moment I laced on a pair of boxing gloves, there wasn’t one person in my family who didn’t believe I wasn’t going to be the heavyweight champion of the world,” he said.

He added that he had become the first Traveller ever in history to win the world heavyweight championship and concluded that God gave him the victory.