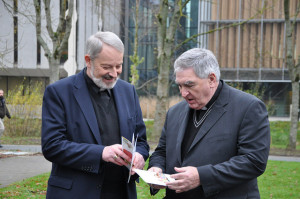 The Irish Episcopal Conference on Wednesday launched a new pastoral statement outlining the Church’s views and teachings on marriage and explaining why it is opposed to any redefinition of marriage by next year’s referendum.

‘The Meaning of Marriage’ is a 16-page leaflet in which the bishops state, “Marriage is a unique relationship different from all others” and that “to seek to re-define the nature of marriage would be to undermine it as the fundamental building block of our society”.

The statement is currently being distributed by the country’s 1,300 parishes and it is also available online.

In the pastoral statement, the bishops acknowledge that those who call for legal recognition of same-sex marriage see it as a matter of fairness, equality and civil rights.

But they explain, “The Church holds that basis human rights must be afforded to all people. This can and should be done without sacrificing the institution of marriage and family and the fundamental role they play in society.”

Launching the statement in Maynooth on the last day of the bishops winter general meeting, Bishop Kevin Doran and Bishop Liam McDaid underlined that the Church believes marriage to be the best environment for children.

Bishop McDaid echoed Pope Francis’ view that every child has a right to a father and a mother.

He said the pastoral statement was intended to “put before our people again the Christian understanding of marriage – a communion of life and love between a man and a woman, in a union for life which is open to new life, and which provides the best and most stable environment for children to grow up and develop in”.

Bishop Kevin Doran said the Government’s proposal to redefine the meaning of marriage by extending marriage to same-sex couples would be a contradiction in terms, because marriage is, of its nature, a committed relationship between a man and woman which is open to the transmission of life.

The Bishop of Elphin stated, “A same-sex union is not a marriage” and he ruled out any equivalence between same-sex partnerships and the union of a man and a woman.

Bishop Liam McDaid, chairman of the bishops’ Council for Marriage and Family said, “The church would take the view that to put any other union on the same level as Christian marriage would be a disservice to society rather than a service.”

According to Bishop Doran, the bishops’ opposition to the Government’s proposed redefinition of marriage in next year’s referendum “is not about homosexuality – it is about the meaning of marriage and the value that we place on that and the importance we see in marriage for children and for their well-being”.

“There can sometimes be an assumption that you can take same sex relationships and call them marriage and put them up there as another item on the menu alongside the existing understanding of marriage.”

But he added that if the law changes and extends marriage to include same-sex couples it changes the meaning of marriage for everybody.

“You can’t have both – it is either one or the other,” he challenged.

In their pastoral letter, the bishops say it is “a grave injustice if the State ignores the uniqueness of the role of husbands and wives, the importance of mothers and fathers in our society.”

They also note that couples face many challenges to building a strong marriage and Bishops Doran and McDaid called on the Government to address problems such as inadequate housing and lack of employment which can prevent a couple from getting married.

Asked about inheritance and visiting rights, Bishop Doran of Elphin said the reality is that there are couples in Irish society who live in long-term committed relationships who are not necessarily married. He said these had to be catered for but not at the expense of marriage.

The Irish bishops, he said, hope that the referendum on the redefinition of marriage will be defeated and he warned that experience elsewhere in the world showed that when the matter has been put to referendum, and has been rejected, most recently in California.

The bishops conclude their pastoral statement by highlighting that “As Catholics, it is not sufficient for us to talk about the importance of family. We also have a responsibility to do all that we can do to offer practical support for marriage and family in our parish communities, in our liturgies and our pastoral action and as individual members of society, through our social and political actions.”