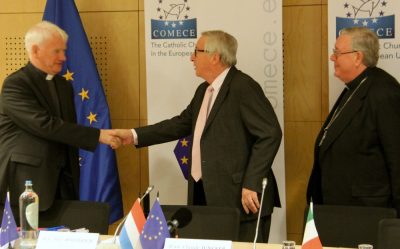 The President of the European Union bishops’ conference has expressed hope that Brexit will not break the fraternity of Europe’s bishops.

At the spring assembly of the Commission of the Bishops’ Conferences of the European Union (COMECE), Bishop Jean-Claude Hollerich described Brexit as a “source of constant apprehension”, both for the present and the future.

“We should not allow this painful process to prevent planning ahead. It is not up to the Church to indicate technical solutions, but as repeatedly stressed by us, Brexit should never succeed in breaking the fraternity uniting us with our British brothers.”

The conference has agreed that post-Brexit, representatives of the English and Welsh Bishops’ Conference would continue to be part of COMECE with observer status. This will also be the case for the Scottish Episcopal Conference.

However, while Britain remains in the EU, the bishops will retain full membership.

“At the moment the bishops’ conferences of Scotland and England & Wales are still full members of COMECE,” the organisation’s press officer, Allesandro Di Maio, told CatholicIreland.net.

“During the last COMECE Assembly, COMECE bishop delegates decided that in case of Brexit, these conferences will have an observer status and will be represented by one bishop at COMECE Assemblies.”

Switzerland and Serbia currently have observer status in the organisation, which tries to monitor political processes in the EU and legal developments in areas of interest to the Church, with the aim of communicating to EU institutions its views concerning integration in the light of the social doctrine of the Church.

Addressing the spring assembly, President of the European Commission, Jean-Claude Juncker said he was a “fervent advocate of the social doctrine of the Church”.

“It is one of the most noble teachings of our Church. All of this is part of a doctrine that Europe does not apply often enough. I would like us to rediscover the values and guiding principles of the social teaching of the Church”.

COMECE has accompanied the EU project and its development, since the foundation of the EU. “In its mission of dialogue with the EU institutions, COMECE stands ready to contribute to any future institutional reform,” Mr Di Maio told CatholicIreland.

The European bishops have appealed to “believers and all people of good will” to vote in the upcoming European elections.

“We invite our fellow Europeans not to fall into the temptation of inward looking, but to exercise their rights towards the construction of Europe. By making their own political opinion heard, the people have the capacity to steer the Union in the direction they want to go.”

They said the EU was “not perfect”.

“It probably needs a new narrative of hope, involving its citizens in projects perceived as more inclusive and better serving the common good.”

Each opinion counts when choosing the persons who will represent our political opinions, the bishops said. “Elections are only the first step of a political engagement and call for citizens to democratically monitor and accompany the political process. In a spirit of responsibility, citizens and the institutions that serve them must work together for a common destiny, going beyond divisions, disinformation and political instrumentalisation,” they said.