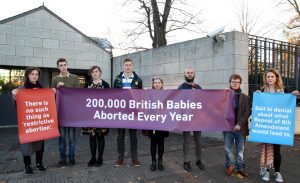 The tragedy of the UK’s 1967 Abortion Act was comemmorated with a brief vigil by the Pro Life Campaign on Friday (Pic. John McElroy)

The Catholic Bishops of Northern Ireland have expressed their dismay as a new abortion regime came into effect on Tuesday facilitating, they warned, “one of the most liberal abortion regimes anywhere in the world”.

In a statement, the five bishops said they were “saddened and dismayed” at the British Government’s decision to introduce “extreme” regulations for abortion in Northern Ireland and they warned that from this week onwards, “some unborn children will be left completely defenceless”.

The statement was issued on behalf of Archbishop Eamon Martin of Armagh, Bishop Noel Treanor of Down and Connor, Bishop Donal McKeown of Derry, Bishop Larry Duffy of Clogher and Bishop Michael Router of Armagh.

They underlined that the regulations go far beyond what is legally required by the Northern Ireland Act (2019) and they highlighted how the views of many citizens – women and men – who responded to the consultation exercise last December were “utterly ignored”.

The Government’s consultation document which asked for responses from the public acknowledged that 79 percent of respondents opposed any change to existing law.

The northern bishops said that during the COVID-19 pandemic when so much is being done to protect lives, these new abortion regulations “do not reflect the overwhelming will of most people in Northern Ireland to protect the life of every human being”.

In relation to the vulnerability of unborn children, they highlighted that no-one will be able to do anything for them once the decision to abort has been made. “This is a disturbing prospect for our society, where the majority of people still seek to promote the values of compassion and respect for every human being.”

They noted that the new regulations are predicated on the legal assumption that the unborn child has no rights, unless the child is wanted.

Elsewhere, the northern bishops highlighted that MLAs are not “entirely devoid of influence” and they urged politicians and people of good will, who recognise the extreme nature of the regulations, not to “meekly acquiesce to their promulgation”.

They said they intended to make these points in writing to MLAs over the coming days and to encourage others to do likewise.

They said that as the Catholic Bishops of Northern Ireland, they remained committed to working with all sectors of society, so that a culture of life becomes a reality for everyone.

Referring to the COVID-19 pandemic, the bishops said that everyone, especially medical staff, were doing all they could to save lives.

“As the number of deaths caused by Coronavirus continues to rise, news reporters frequently remind us that behind the statistics are real people. Their lives matter regardless of age or ability, gender or background. To limit the loss of life and heart break for many families, the UK Government is investing heavily in providing the resources necessary to treat patients and protect the lives of all staff working to deliver front-line services.”

“Against this background, we are saddened and dismayed at the Government’s decision to introduce extreme regulations for the delivery of abortion services in Northern Ireland,” the bishops said.

Separately, the Democratic Unionist Party’s Assembly member Paul Givan has hit out at the Northern Ireland Office (NIO) for introducing the changes to the abortion law despite the fact that Stormont is now sitting.

“Here in Northern Ireland they have the most extreme, radical, abortion laws anywhere in Europe. It is a travesty that this has been allowed to happen,” the DUP politician said.