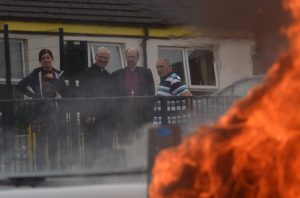 The Church of Ireland Bishop of Derry and Raphoe, Rt Rev Ken Good, and the Roman Catholic Bishop of Derry, Dr Donal McKeown, visited the Fountain and Bogside together on Tuesday (10 July) to meet people who had been affected by violence over the past few days.

“The continuing attacks on the Fountain – indeed, attacks on people in any part of our community – are an affront to our society and deserve our unqualified condemnation,” Bishops McKeown and Good said in a joint statement.

“There is no justification for the stone-throwing and petrol bombing which has terrorised people living in the Fountain, terrified residents of Alexander House, and appalled the vast, vast majority of their fellow citizens.”

The bishops said they were thankful that no one has been seriously injured or worse as a result of the recent attacks, but recognised that people might not be so lucky in the coming days. 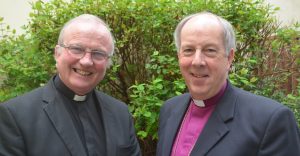 In their joint statement they condemned the violence and urged parents to use their influence to stop it. They offered full support to the PSNI and commended the many local community workers who work to prevent interface violence and improve community relations. They encouraged political representatives to do their utmost to end the stalemate which has paralysed politics in Northern Ireland.

A van that had been hijacked was set on fire at the bottom of the Lecky Road flyover as the two bishops left the Bogside after meeting people there. The clergymen’s visit included speaking with youth workers and residents near the peace wall, as well as senior citizens from Alexander House who have been caught up in the violence.

Violence continued for several nights in advance of the 12th of July, which is a bank holiday and commemoration all around Northern Ireland, in particular by members of the Orange Order, of the Battle of the Boyne. So far, more than 20 petrol bombs were thrown on one night alone in the Bogside. Several people were arrested and metro and bus services were cancelled in areas where violence broke out.