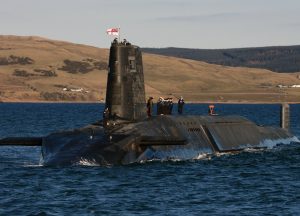 The British Parliament is set to vote today on whether to renew its nuclear weapon programme (Trident).   In advance of the vote, the Bishops of England and Wales issued a statement in which they recalled pastoral guidance  on the morality of nuclear weapons which the bishops issued in 2006.

“The very existence of nuclear weapons has always posed grave moral questions,” said the guidance.  ” Their uniquely destructive power means that they belong in a different category from any other weapons… Our judgement is that, by decommissioning its nuclear weapons, the UK now has a unique opportunity to offer the international community an approach to security and legitimate self-defence without the unconscionable threat of nuclear destruction. At the same time it could give a new impetus to the wider process towards total nuclear disarmament.”

That course of action was not taken, said the bishops in their recent statement.

Noting the the “grave responsibility for national security” that rests with the government and parliament, the Catholic Bishops’ Conference of England and Wales said they knew that those charged with making the decision on whether to renew the UK’s nuclear weapons programme would reflect seriously on “whether their possession acts as an effective deterrent”.

They went on: “We ask them to reflect too on the view that the use of nuclear weapons can never be morally justified as their use would cause the mass deaths of innocent civilians and does not fit within the Just War tradition. Such use could never be a proportionate response.”

Quoting Pope Francis address to the UN, they said  “An ethics and a law based on the threat of mutual destruction – and possibly the destruction of all mankind – are self-contradictory.”

“Parliament now has an opportunity to reinforce the extension and implementation of the Nuclear Non-Proliferation Treaty to which the UK is a signatory, and which obliges all who possess nuclear weapons to work towards their elimination,” they said.  “We pray that the decision taken by Parliament will include the intention and the steps to achieve that undertaking: the complete elimination of these weapons.”

According to British government documents, since 1969, a British submarine carrying nuclear weapons has always been on patrol, somewhere in the world’s oceans. Currently the UK has four Trident Submarines.  Each Trident nuclear submarines carries eight warheads, each with 20 missiles. Each missile is 7-30 times more powerful than the bomb dropped on Hiroshima

Trident came into use in the 1990s. According to the BBC, although each component has years of use left, they cannot last indefinitely. “The current generation of four submarines would begin to end their working lives some time in the late 2020s.”

Supporters argue that Trident is an indispensable deterrent for protecting UK security. The nuclear defence industry is also a major employer. Some estimates suggest that up to 15,000 jobs may be lost – as well as considerable expertise – if a new batch of submarines is not commissioned.

Meanwhile  over the weekend thousands of Scottish people in more than 30 towns and cities across Scotland took to the streets to protest against the UK’s use of a military base in Faslane, Argyll and Bute, to store nuclear weapons and the leader of the Scottish Nationalist Party, Angus Robertson, has called on the Teresa May, the new Prime Minister, to delay the vote on the controversial Trident programme.