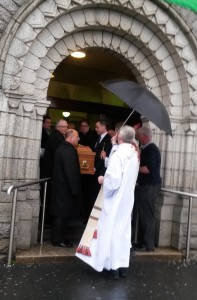 Around ninety priests, eight bishops and the papal nuncio, Archbishop Charles Brown, braved terrible wind and rain yesterday to pay their respects to a much loved friend and colleague Bishop Dermot O’Mahony, who died on 10 December.

Leading the mourners was the bishop’s brother Gerry O’Mahony who described him as “gentle, deeply spiritual, kind, caring, a great believer in Lourdes, Pax Christi, justice and peace and the dignity of man, in particular the handicapped, underprivileged and the voiceless”.

“He had a great gift of comforting those who came to him in distress and they were hundreds if not thousands.”

He recalled his brother’s love for rugby and made the congregation laugh describing how a picture of Ronan O’Gara hung on the wall of his sitting room “between the pictures of many saints”.

Becoming serious he went on. “However I must fulfil a promise I made to Dermot.”

“This time of year used to be one of great trouble. In December 2009, he sent a letter to the archdiocese [of Dublin] in which he stated, ‘I profoundly regret that any action or inaction of mine should have contributed to the suffering of even a single child. I want to apologise for my failures from the bottom of my heart.’”

“For whatever reason, and I can only speculate, that statement was never made public lending to a media perception that Dermot did not express any remorse. It was something that haunted him to the very end of his life.”

Chief celebrant, lifelong friend Fr Tim Murphy who Bishop O’Mahony requested in his will to be principal celebrant, said they shared a deep friendship for nearly 50 years where they could “speak the truth to one another regardless of cost”.

In that spirit he wanted to “address some elephants in the room without offending anyone”. 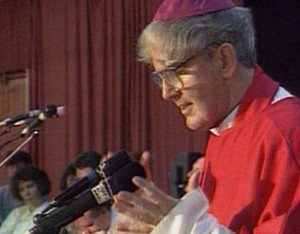 He recalled the mid 70s when Bishop O’Mahony was the principal celebrant at a Charismatic Renewal Conference in the RDS in Dublin. “There was a wonderful atmosphere, love and smiles. It was a mountaintop experience.”

“Then in 2009 there was the Murphy report and everything changed. It was personally devastating for him. He was the first to say that what he suffered no way equated to the suffering of the innocent who were traumatised and abused. It was his sensitivity to that pain and that suffering that made his personal apology so real and heartfelt.”

The First Reading of the funeral mass from Micah: “This is what Yahweh asks of you: to act justly, to love tenderly and to walk humbly with your God,” was Bishop O’Mahony’s mindset. “To say he was involved in a cover up is almost laughable.”

Fr Murphy said the bishop’s personality was the “personification of love and goodness” and “to be accused of having no care for the most innocent and vulnerable” was the “deepest cut”.

Shortly before his death, Fr Murphy visited him in hospital. He was lying on the bed with his eyes closed tightly “moaning and crying with pain”.

When he became aware of Fr Murphy’s presence, he apologised. “You know as you grow older you are less tolerant for physical pain,” he said.

“As I left hospital I was thinking how much of that physical pain was caused by the deep psychological pain that within his heart he felt he had been wronged, treated unjustly and made a scapegoat.”

He paid tribute to the bishop’s friends, the many priests who kept in touch with him and the Association of Catholic Priests (ACP) and others, like former judge of the Hong Kong District Court, Fergal Sweeney, who “attempted to bring deeper analysis into what had transpired”.

But Bishop O’Mahony’s life was not just about 2009, he said, recalling the important contributions he had made to Church and national life – addressing the New Ireland Forum and with a Pax Christi delegation in Long Kesh prison, negotiating a settlement that “would have saved so many lives but for the intransigence of the British Prime Minister”.

At the conclusion of the Mass, marked by beautiful congregational singing and moments of spontaneous applause, Bishop Eamonn Walsh said the society in which Bishop O’Mahony lived “ignored the principle of equity – audi alteram partem – hear the other side.” Describing the bishop’s integrity, he said “goodness cannot be destroyed”.

Bishop Dermot O’Mahony died on 10 December, aged 80, following a serious illness which he had for many years.

He was ordained a priest in 1960, and then studied canon law in Rome for four years. In 1975 he was ordained bishop. He resigned as Auxiliary Bishop of Dublin in 1996 on health grounds, but continued to work as his health permitted.

He chaired the Irish Bishops’ Commission for Justice and Peace during the Troubles in Northern Ireland, and during the hunger strikes at the Maze prison.

Among other work, he served on the Irish Pilgrimage Trust which arranged pilgrimages to Lourdes for children.

When a group of strikers was invited by Archbishop Desmond Tutu on a fact-finding mission to South Africa, but were refused entry in Johannesburg, Dermot O’Mahony was among those who greeted them on their arrival at Dublin airport.

Archbishop Diarmuid Martin lead the mourners at the Removal Ceremony on Monday night and in a homily expressed his great appreciation for the work Bishop O’Mahony carried out over the years.

Writing after his death on the ACP blog, Fr Pádraig McCarthy from the ACP said that following the Murphy Report the bishop felt very deeply the pain of being excluded from pastoral and liturgical life in the diocese he had served.

“Sadly, he died before the full wider context of how diocesan personnel handled allegations has become part of public consciousness.”