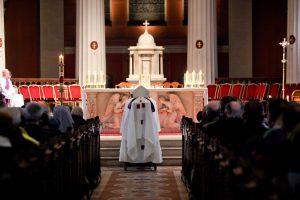 Bishop Eamonn Walsh paid tribute to Cardinal Desmond Connell’s “passion and courage” in thumping the table when he challenged Vatican officials over clerical abuse protocols at a meeting at Rosses Point in 1997.

In his homily at the reception of remains of the former Archbishop of Dublin, Bishop Walsh recalled an incident which emerged in an RTÉ documentary in 2011 which revealed that the Vatican’s Congregation for the Clergy in 1997 directed the Irish bishops not to enforce their new policy calling for mandatory reporting of priests who sexually abused children.

At a meeting in 1998, the then prefect of the Congregation for the Clergy, Cardinal Darío Castrillón Hoyos, met representatives of the Irish bishops in Rosses Point to discuss safeguarding guidelines and, according to the RTÉ programme, ‘Unspeakable Crimes’, the Colombian prelate’s stance caused Desmond Connell to pound the table in frustration.

Addressing mourners in St Mary’s Pro Cathedral, Dr Walsh said, “There were occasions when he did not speak in philosophical or theological language like when he spoke up with passion and courage thumping the table at the well publicised meeting at Rosses Point.” 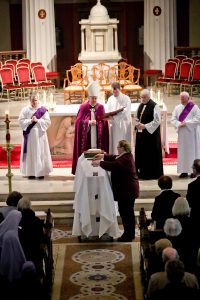 He also recalled how in his earlier years as Archbishop, Dr Connell “daringly launched a billboard advertising campaign on the Eucharist as ‘The Bread of Life’,” which he said was trying to heighten awareness of God’s love for us, expressed in Jesus giving his all for us.

Appealing for God’s mercy and welcome home to Cardinal Desmond Connell, he described the former UCD academic as “a man of deep faith, integrity of character, deep love for his people and priests, and all too conscious of his weaknesses and inadequacies”.

Acknowledging that it was not the time to re-cap on all the tributes and critiques of the past few days since Cardinal Connell’s passing on Tuesday morning, Bishop Walsh singled out one moment.

“While watching for the first time the screening of ‘Cardinal Secrets’ – his countenance visibly changed; contorted in shock and horror at the unspeakable depraved, degrading abuse unfolding before his eyes. It was a watershed moment that came too late for many. He asked, and would want me to do so again today, to express without reservation his bitter regret and ‘ask for forgiveness from those so shamefully harmed’.”

When Cardinal Connell became archbishop, the Archdiocese of Dublin was deeply in debt, which with the guidance of Monsignor Wilson and the team in the Finance Secretariat, he succeeded in clearing.

Bishop Walsh said the Cardinal was so appreciative of the generosity of the people and the Religious who gave without fanfare.

“The Cardinal would want the contribution of the Religious in ministry, service and generosity to the archdiocese acknowledged on an occasion such as this,” he said. 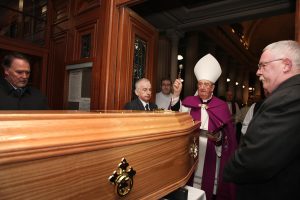 Elsewhere in his tribute, Bishop Walsh said that “Alongside his deep, deep faith, were his gifts as a philosopher, historian and lover of classical music; Malebranche, Mahler, the French Revolution. His use of language was spoken with laser precision. The exactness of his words did not gift him to deal with modern communications: mixed with the complexities of scrupulosity, he was not equipped for the world of sound-bytes, door-stepping, and media deadlines. He preferred the pause button to the fast-forward.

“Being thrust from the world of academia into being the front person for the largest diocese in the country had him stepping on the occasional landmine,” Dr Walsh acknowledged.

He added, “This did not deter him from living up to his responsibility to teach and preach. It often would have left him in a lonely place, were it not for his deep faith and belief that God was beside him. He could identify with the Gospel just read.”

Separately, in a message addressed to Archbishop of Dublin Diarmuid Martin, Pope Francis has expressed his condolences on the death of Cardinal Connell and recalled his many contributions to the Church in Ireland, especially in the area of philosophical studies.

In his message, the Pope states that “In the sure hope of the Resurrection, I cordially impart my Apostolic Blessing upon all who mourn the late Cardinal, as a pledge of consolation and peace in the Lord Jesus.”

Cardinal Connell was born on 24 March 1926 in Phibsboro, Ireland. He was ordained for the Archdiocese of Dublin on 19 May 1951 and held a doctorate in philosophy from the Catholic University of Louvain. 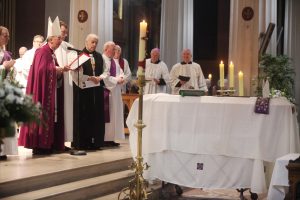 In 1953 he started teaching in the Department of Metaphysics at University College Dublin where he was appointed professor of general metaphysics in 1972 and elected dean of the Faculty of Philosophy and Sociology in 1983.

He wrote on philosophical and theological subjects and for his published work was awarded the degree D.Litt. by the National University of Ireland in 1981.

He was appointed Archbishop of Dublin on 21 January 1988, a position he held until April 2004.

Cardinal Connell was created a Cardinal by Pope St John Paul II in the Consistory of 21 February 2001 with the Titular church of St Sylvester in Capite.