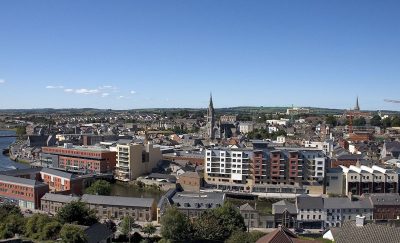 Drogheda, where a drug-related feud has led to violence that has claimed two lives in the past year

Bishop Michael Router, Auxiliary Bishop of the Archdiocese of Armagh, has responded to reports of the violent murder of a teenager whose dismembered remains were deposited in a number of locations in Dublin on Monday and Wednesday.

“All human life is sacred and an attack of this nature on someone who is still a child is disgusting and beyond belief,” the bishop said. “To murder another human being in such a way is to totally disregard the basic tenets of our Christian faith and is, indeed, an attack on God in whose image we are all made. This desecration of life has diminished our common humanity and our sense of ourselves as a civilised people.”

Bishop Router commented on the link of the adolescent’s murder to a violent feud in Drogheda which claimed two lives over the past year. “There are people living amongst us with blood on their hands, and we all have a responsibility to assist the Gardaí to apprehend, not just the perpetrators of this evil, but the gang leaders who orchestrated it,” Bishop Router stated.

“Enough is enough,” the bishop continued. “The reprehensible sub-culture in our society which views all human life as expendable, including the lives of children, must be defeated.” Bishop Router also emphasised how such gangs groom children and how we, as faithful Catholics, need to take back control so that vulnerable children can be “cherished, not exploited”.

Bishop Router said that he “earnestly hopes” that community-based organisations who fight drug abuse will be well resourced and supported so that they can be effective. He even highlighted how this issue needs to be “seriously addressed” during the current general election campaign and how it should be a “genuine priority” for incoming politicians.

“By way of prayer and action,” the bishop concluded, “We all have a role to play in maintaining the common good. I reiterate my offer to liaise between those who are feuding. From the bottom of my heart, I ask individuals and communities to stand together and cooperate with Gardaí in every way possible to help permanently bring to an end this cycle of bloody violence in our community.”